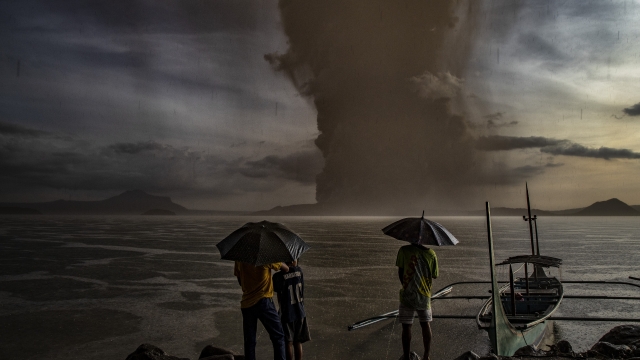 Almost half a million people have been ordered to evacuate their homes as authorities in the Philippines warn the Taal volcano could soon erupt.

Lava started spewing out of the volcano on Monday.

The Philippine Institute of Volcanology and Seismology raised the volcano's alert status to an Alert Level 4 after Taal began shooting smoke and ash into the air Sunday. That high alert level means a "hazardous explosive eruption is possible within hours to days."

Officials are advising residents to wear masks, since breathing in volcanic ash can lead to respiratory problems.

Operations partially resumed at Manila's international airport Monday, after ashfall from the volcano prompted the cancellation of over 240 flights the day before. But all government offices and schools in Manila are still shut down.

The Philippines is located on the Pacific Ring of Fire, an area that has a lot of seismic and volcanic activity. The Taal volcano last erupted in 1977.