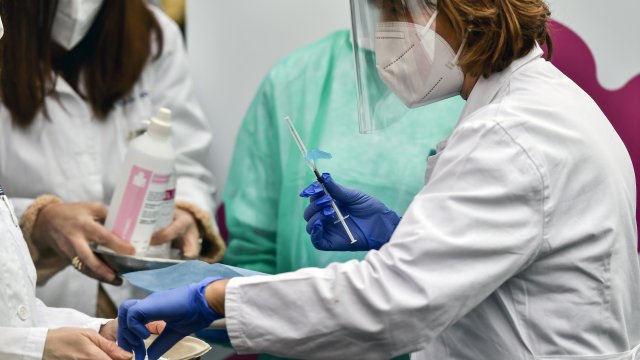 SMS
European Union Begins Mass Vaccination Program As New Variant Spreads
By Alex Arger
By Alex Arger
December 27, 2020
Austrian chancellor calls the inoculations "not the end of the pandemic, but the beginning of the victory."
SHOW TRANSCRIPT

Vaccinations are now underway across nursing homes and hospitals in the European Union in what the Austrian chancellor calls "the beginning of victory."

The 27 nations launched their mass vaccination program Sunday, though Slovakia, Hungary and Germany got a head start on administering doses the day before.

At one German nursing home, 101-year-old Gertrud Haase was the first to get the Pfizer shot after her country saw nearly 1,000 virus deaths a day in the week before Christmas. The EU has recorded at least 16 million infections, though some experts say those numbers are low because of missed cases and limited testing.

Each country is only getting a fraction of what they need now, with a larger roll out expected next month.

The EU is looking ahead to January 6, when the European Medicines Agency will consider approving the Moderna vaccine, which is already being used in the U.S.

And a higher supply of vaccines is even more urgent now, as a new, more contagious COVID-19 variant is spreading through some of the EU. Producers of the Pfizer and Moderna vaccines say they're confident their shots will work against the new strain, but that more studies would be needed.