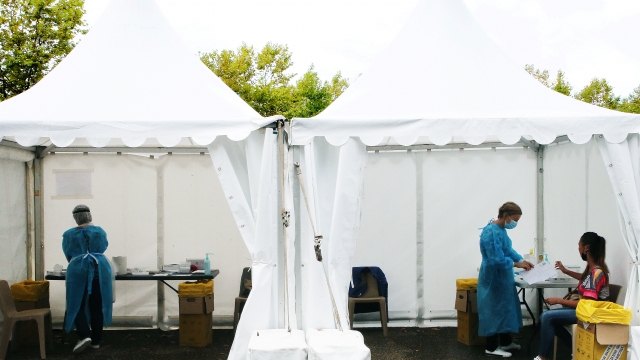 SMS
Europe Sees Spike Of COVID-19 Cases
By Amy Morona
By Amy Morona
September 22, 2020
“The U.S. has about half the population of Europe, however, we have twice as many cases.”
SHOW TRANSCRIPT

As coronavirus cases continue to climb in both the United States and Europe, experts worry it could be the beginning of a fall surge.

"As some countries start to open up, we see cases, and they're starting to spike,” said Tedros Adhanom Ghebreyesus, Director General of the World Health Organization.

European leaders are making changes after relaxed rules and expanded reopenings. Chunks of Spain have gone into a new lockdown, the Czech Republic appointed a new minister of health, and the United Kingdom announced pubs and restaurants would now close at 10 p.m. to try to slow the spread.

"A month ago, on average around a thousand people across the U.K. were testing positive for coronavirus every day," said British Prime Minister Boris Johnson. "The latest figure has almost quadrupled to 3,929."

On Tuesday President Trump defended his response, despite the U.S. leading the world in cases and deaths. He spoke in a recorded address to the United Nations virtual General Assembly.

“In the United States we launched the most aggressive mobilization since the Second World War,” said President Trump.

An influential model from the University of Washington predicts the U.S. is nowhere close to being out of the woods yet, suggesting nearly 180,000 more people will die in the United States by January.

“The U.S. has about half the population of Europe, however, we have twice as many cases,” said Dr. Jon Andrus, an adjunct professor of global health at George Washington University.

Dr. Andrus thinks we should learn from Europe’s mistakes. He points out that more Europeans taking non-essential trips may have led tourists to lower their guards, contributing to potential superspreader events.

“They're not masking, they're not physically distancing, and then they return home,” he said.

Besides wearing masks and washing hands, he wants Americans to expand contact tracing, like in Canada and South Korea.

“We need to be reading from the same sheet of music," Andrus said. "When one community is doing one thing, might have tighter restrictions, and another community is very lax and has no restrictions. at the end of the day, that does not help.”