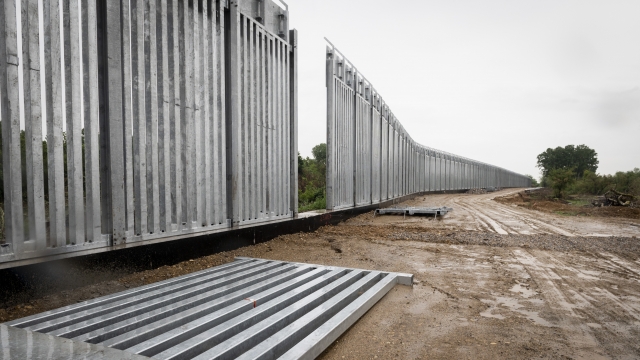 With the world on lockdown during the pandemic, the EU has been building and testing new border control measures in Greece.

From towering steel walls, to deafening sound blasts, the European Union is doubling down on its efforts to keep migrants out.

"Our main goal is to prevent migrants from entering the country illegally. To accomplish this, we use new and modern equipment," said Major Dimosthenis Kamargios with Greek Border Police.

With the world on lockdown during the COVID-19 pandemic, Greek border police have been busy building and testing new barrier technologies to prevent migrants, many traveling from Turkey. According to the Associated Press, this includes long-range sound cannons, observation towers and steel walls similar to what has been constructed along the U.S. and Mexico border.

The outlet reports that the EU has spent nearly $4 billion to research and expand border security technologies following the refugee crisis it experienced in 2015- 2016. The EU has even invested in the development of artificial technology, such as lie detectors for border crossings.

But while Greek residents along the border have welcomed the barrier testing, some EU politicians say they are concerned that the technology lacks oversight and could potentially be used against EU residents.

"What we are seeing at the borders, and in treating foreign nationals generally, is that it's often a testing field for technologies that are later then used on Europeans as well. And that's why everybody should care, in their own self-interest, [about] what is happening at the borders," said Patrick Breyer, a member of the European Parliament from Germany's Pirate Party.

Despite dropping nearly 78% during the pandemic, border officials say they anticipate migrant arrivals to swell again as the world and borders begin to reopen.