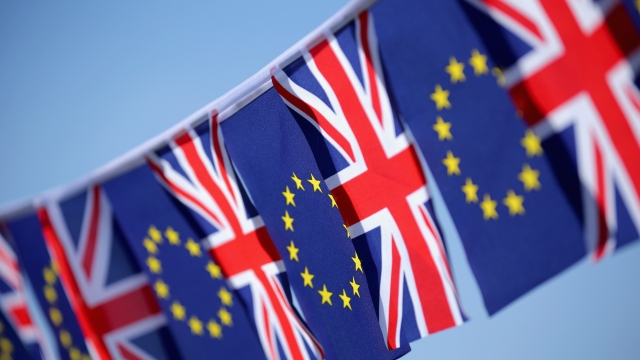 SMS
EU Takes Legal Action Against U.K. For Not Naming New Commissioner
By Ahmed Jawadi
By Ahmed Jawadi
November 14, 2019
The new EU Commission can't take office until the U.K. nominates a candidate, but in light of upcoming elections, the U.K. has refused to do so.
SHOW TRANSCRIPT

The European Union has launched legal action against the U.K. over its decision to not name a candidate for the EU Commission.

The EU Commission said in a statement Thursday it has "sent a letter of formal notice to the [U.K.] for breaching its EU Treaty obligations" by failing to nominate a candidate for EU commissioner. The U.K. told the bloc Wednesday it wouldn't nominate anyone due to its upcoming general election on Dec. 12. British authorities say the country's "pre-election guidance states the U.K. should not normally make nominations for international appointments during this period." But the Commission says EU law dictates a member country "may not invoke provisions prevailing in its domestic legal system to justify failure to observe obligations arising under Union law."

The new EU Commission, led by President-elect Ursula von der Leyen, was supposed to take office on Nov. 1, the day after the U.K. was scheduled to leave the EU. But after British lawmakers failed to approve a Brexit deal before the Oct. 31 deadline, the withdrawal date was pushed back to January. That means the U.K. is still part of the EU for the time being, and the Commission cannot formally take office until all of its member states have a representative.

The Commission gave the U.K. until Nov. 22 "at the latest" to respond. The formal notice is the first legal step the Commission takes if it believes a member state has violated any of the bloc's rules. The U.K. could have to pay huge fines if the case makes it all the way to the European Court of Justice.