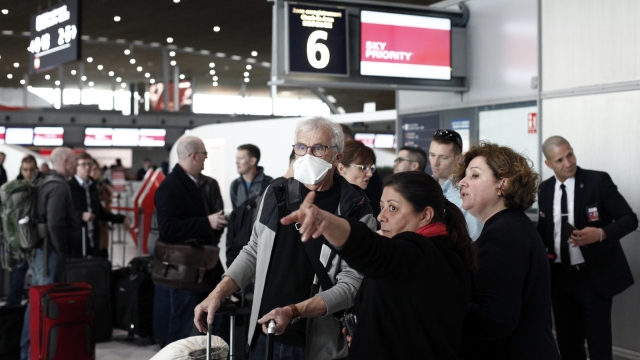 President Trump's ban on travelers from much of Europe is drawing fierce criticism across the Atlantic, including an extraordinary rebuke from the European Union.

Ursula von der Leyen of the European Commission and Charles Michel of the European Council blasted President Trump for unilaterally imposing travel restrictions. In a joint statement on behalf of the EU, they said Thursday: "The Coronavirus is a global crisis, not limited to any continent and it requires cooperation rather than unilateral action. The European Union disapproves of the fact that the U.S. decision to impose a travel ban was taken unilaterally and without consultation."

"After consulting with our top government health professionals, I have decided to take several strong but necessary actions to protect the health and well-being of all Americans. To keep new cases from entering our shores, we will be suspending all travel from Europe to the United States for the next 30 days. The new rules will go into effect Friday at midnight,” President Trump said.

The president's depiction of the coronavirus as a foreign virus infuriated Gérard Araud, France’s former ambassador to the U.S. He said: “Trump needed a narrative to exonerate his administration from any responsibility in the crisis. The foreigner is always a good scapegoat."

Among EU countries, Italy is by far the hardest hit by the virus, with public spaces largely closed off and the country's 60 million residents on lockdown.

Yet European critics argue President Trump's decision is driven by a disdain for the EU's open borders between member countries. The president notably exempted noncontiguous countries Ireland and Britain, which is leaving the EU.