EU Court Rules Obesity Can Be A Workplace Disability 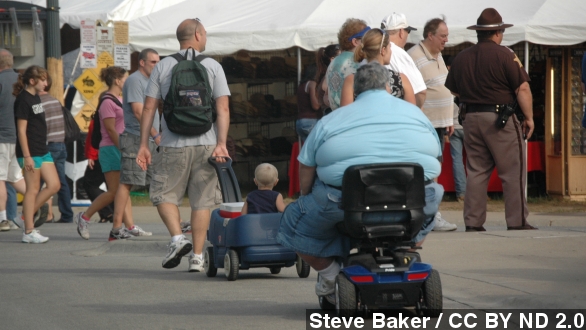 SMS
EU Court Rules Obesity Can Be A Workplace Disability
By Matt Moreno
By Matt Moreno
December 18, 2014
An EU court ruling says employers and service providers can't discriminate against obese individuals and must make reasonable accommodations for them
SHOW TRANSCRIPT

Obesity can now be considered a disability, according to an EU court ruling Thursday.

The Court of Justice of the European Union ruled on the case of this man, Karsten Kaltoft, who says he was fired from his job as a nanny because he was obese. Kaltoft reportedly never weighed less than 353 pounds while on the job. (Video via YouTube / foawebtv)

The ruling means employers are not allowed to discriminate against obese individuals. It also applies to service providers, meaning places like restaurants, airlines and more must make adjustments to accommodate obese individuals.

The ruling affects the more than 20 percent of the European population considered obese.

The BBC's legal affairs correspondent Clive Coleman says, with this ruling, employers and service providers will now be required to make "reasonable" adjustments to accommodate such individuals.

"So for example, a premiership football club, it may be reasonable for them to make two seats available for one obese person. ... But a smaller club, a non-league club with only 200 seats, perhaps not reasonable for them," Coleman says.

The Telegraph summarizes this key part of the court's decision: "Important to the ruling, is the EU court's judgement that the origin of the disability is irrelevant even if someone's gross obesity is caused by overeating or gluttony."

And The Guardian points out the ruling "did not even resolve the case in dispute," saying a court in Denmark will later rule on whether Kaltoft is considered obese and if that's what cost him his job.

In the U.S., however, it was just last year that the American Medical Association controversially recognized obesity as a disease.

"Calling it a disease is unclear whether it's going to move things in the right direction or not," says Dr. Marc Siegel of the NYU Langone Medical Center.

A 2007 study out of Johns Hopkins University says obesity can lead to an increase in work-related injuries.

Earlier this year, Kaltoft told the BBC he didn't view himself as disabled, but, more or less, didn't feel like someone should be fired for being obese.