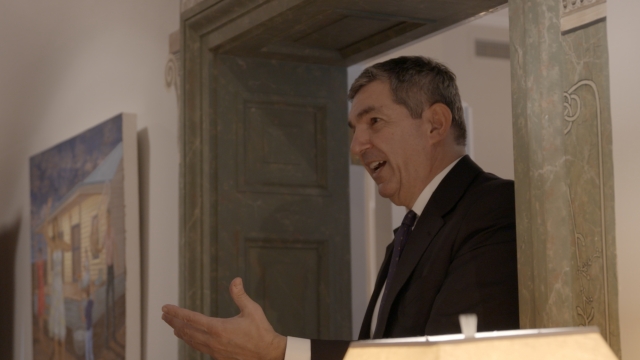 SMS
Decor Diplomacy: EU's US Ambassador Using Art To Build Connections
By Matt Picht
By Matt Picht
June 28, 2019
E.U. Ambassador to the U.S. Stavros Lambrinidis is using the decor of his new official home to make a connection with the U.S.
SHOW TRANSCRIPT

EU Ambassador Stavros Lambrinidis is taking a novel approach to decorating his official residence in Washington D.C. — he's filling his house with American art, a small move he hopes will go a long way towards promoting U.S.-E.U. diplomacy.

The ambassador's house is currently hosting over 30 pieces of art from San Angelo, Texas, on loan from the town's Museum of Fine Arts for the next year. And in June, he invited members of the Texas congressional delegation to view the works in person.

The Lone Star State is a natural first choice for the ambassador to highlight: the state was the top exporter of goods to EU countries in the U.S. last year.

Other states will also be featured as part of a broader outreach program focusing on the connection between the European Union and individual U.S. states. In 2018 the European Union was the number one destination for exports in 20 states, and in the top three in 46 states overall.

The trans-Atlantic relationship has been under significant strain in recent years — President Trump has criticized the continent on everything from trade to defense spending. But the ambassador is still upbeat about the prospects for the U.S. and the E.U.