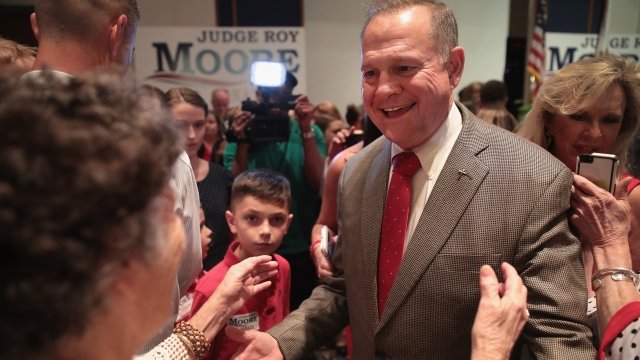 SMS
As Washington Republicans Flee, Alabama GOP Stands By Roy Moore
By Eugene Daniels
By Eugene Daniels
November 13, 2017
At least one poll found 29 percent of voters said they were more likely to cast ballots for Moore after the allegations.
SHOW TRANSCRIPT

Republicans in D.C. seem to be scrambling to distance themselves from Roy Moore, the GOP candidate in Alabama's U.S. Senate race who's been accused of pursuing relationships with multiple teenage girls during his 30s. One of his accusers says she was 14 at the time.

But the so-called "swamp" turning its back on Moore doesn't seem to have swayed the folks who really matter in the election: Alabamans. At least one poll taken after the allegations found 29 percent were more likely to vote for him now, while 33 percent said the scandal didn't affect their vote.

Moore has repeatedly denied the accusations and portrayed the scandal as a well-organized character attack of "fake news." And those poll numbers suggest that's working for now and isn't really hurting him in the special election — at least, not yet. 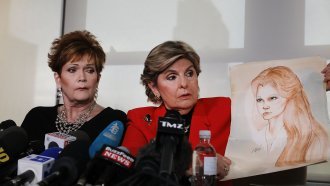 State and local officials are also backing Moore — one state representative called for the accusers to be prosecuted, adding, "you can't be a victim 40 years later." The state auditor defended relationships between older men and younger women by invoking the Biblical story of Jesus' parents.

That suggests they think siding with Moore won't mean much blowback from voters. And history might show they shouldn't be worried. One expert told Politico, "voters in this state have a history of ignoring sexual misconduct." And Moore's support is deeply rooted in the conservative wing of the party, thanks to his views on abortion and LGBTQ rights.

Given all that, denouncements from establishment Republicans like Mitch McConnell might only push anti-establishment Moore voters who believe he's being smeared to head to the polls in December.