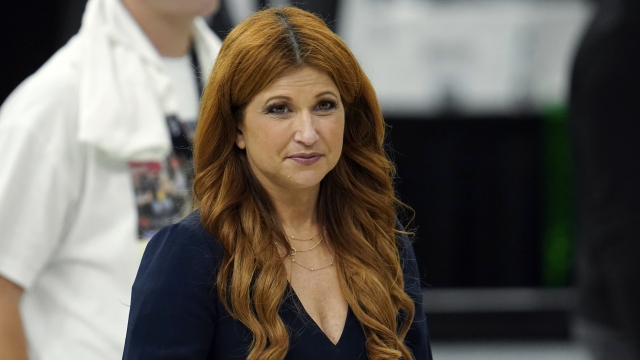 Nichols came under fire after a report by The New York Times detailed critical comments she made about her Black colleague, Maria Taylor.

ESPN is canceling Rachel Nichols' show, "The Jump," and pulling her off NBA programming, almost two months after it was revealed she was caught on audio tape suggesting a colleague's promotion was diversity-related.

David Roberts, who was named last week to oversee the network's NBA coverage, said in a statement that "we mutually agreed that this approach regarding our NBA coverage was best for all concerned."

"Rachel is an excellent reporter, host and journalist, and we thank her for her many contributions to our NBA content," Roberts said.

Nichols also confirmed the move on her Instagram page. Sports Business Journal was the first to report it.

Nichols posted: "Got to create a whole show and spend five years hanging out with some of my favorite people talking about one my favorite things. An eternal thank you to our amazing producers & crew – 'The Jump' was never built to last forever but it sure was fun. More to come …"

ESPN will have a new daily NBA show that will premiere sometime before the regular season begins in October. Roberts also will be responsible for revamping and finding a host for the network's "NBA Countdown" show, given Maria Taylor's departure to NBC.

Nichols, who has more than a year remaining on her contract, has been an integral part of ESPN's NBA coverage since she returned to the network in 2016. "The Jump" started in February that year and went from airing only during the season to a nearly year-round fixture. She also was the sideline reporter for most of ESPN's top national games this season.

Nichols came under fire, though, after a report by The New York Times on July 4 detailed critical comments she made about Taylor.

Nichols, who is white, made the comments last year when she learned Taylor, who is Black, would lead the network's studio show instead of her during the league's restart at Walt Disney World.

In a phone conversation that was accidentally recorded and obtained by the newspaper, Nichols said: "I wish Maria Taylor all the success in the world — she covers football, she covers basketball. If you need to give her more things to do because you are feeling pressure about your crappy longtime record on diversity — which, by the way, I know personally from the female side of it — like, go for it. Just find it somewhere else. You are not going to find it from me or taking my thing away."

The Times reported that the show’s crew was angry with Nichols, who apologized while hosting "The Jump" on July 5. The report also came less than three weeks before Taylor's contract was set to expire with ESPN and after she rejected an extension.

ESPN replaced Nichols with Malika Andrews as its sideline reporter for the NBA Finals following the report. The 26-year-old Andrews, who hosted "The Jump" last week while Nichols was on vacation, is expected to have a prominent role in the network's coverage.