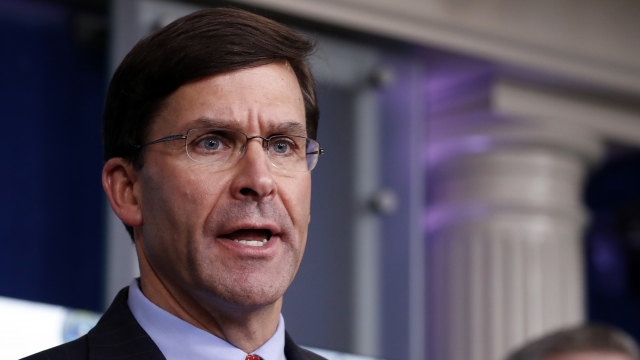 In a video message on Thursday, Esper said he was proud to be a part "of an institution ... that embraces diversity and inclusion," but acknowledged the military was "not immune to the forces of bias and prejudice."

"We know this bias burdens many of our service members and has direct and indirect impact on the experiences of our minority members, the cultural and ethnic diversity of the force, and representation in our officer ranks," Esper said. "These things have no place in our military; they have no place in our country."

Esper revealed three new initiatives the Pentagon will undertake "to build a better U.S. military that pursues equal opportunity and aspires to true meritocracy." The first is a Defense Board on Diversity and Inclusion in the Military, which will work through the end of the year "to develop concrete, actionable recommendations to increase racial diversity and ensure equal opportunity across all ranks." Esper also said he will form a Defense Advisory Committee on Diversity and Inclusion in the Armed Services, which will build off the work of the board and ultimately replace it. And he said he's given Pentagon leaders until the end of the month to bring him ideas that can be implemented immediately.

Esper said these actions "are just the first steps" and that his "goal is to effect an enterprise-wide, organizational and cultural shift." But he promised that he'll personally work on this "every step of the way."