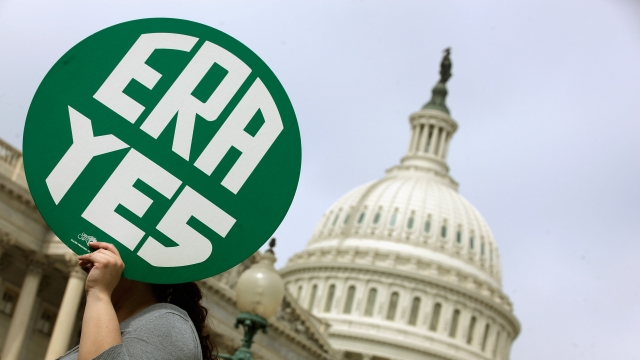 “Equal means equal.” That was the rallying cry that brought rights activists to the steps of Virginia’s Capitol building in Richmond on Wednesday. Virginia is expected to become the pivotal 38th state necessary to make the Equal Rights Amendment part of the U.S. Constitution. And after decades of advocacy work, that possibility is giving many a reason to celebrate.

If approved by Virginia's General Assembly, the ERA would guarantee equal rights under the law, regardless of sex. The General Assembly's new Democratic leadership and Virginia Gov. Ralph Northam has made passing the resolution a priority in 2020.

Opponents, and the U.S. Justice Department, are laying down roadblocks to keep the ERA from becoming the 28th Amendment to the Constitution if it is ratified by Virginia.

But Virginia's new commitment to the ERA is welcomed by its supporters, including Air Force veteran Daphne Portis. Last year, Portis rebuked lawmakers on the House floor after they had voted down the measure.

Portis said: "I wasn't trying to have any type of press conference or anything. They wanted to move it to the rotunda, and I was just angry because, you know, this has been going on for so many years now and I was just really frustrated."

Emilia Couture is the Outreach Director for Generation Ratify. Couture said: "I think a lot of young people don't necessarily about [the ERA]. And the people who are older who have been advocating for awhile don't know how to reach those young people. And so that's what we are trying to do — we're trying to bridge that generational gap, as well as make the movement more inclusive and more intersectional for everyone."

Kati Hornung is the Campaign Coordinator for the group VAratifyERA. Hornung said: "Many of us have been working very hard to put Virginia on the right side of history this time around. And to lose by one vote was a little devastating. But we worked really hard to get out the vote and make sure that citizens are letting their votes be heard and make sure important legislation that all of Virginia wants to see happen gets done."

The ERA was first passed by Congress in 1972, and states originally had until 1979 to approve it. But only 35 states had done so by the time a subsequent extension expired in June 1982.

On Wednesday, the Justice Department said that deadline had made the ERA no longer eligible for ratification. The agency's opinion followed a lawsuit filed in December by three states opposed to the amendment.

In a statement, the attorneys general of Alabama, Louisiana and South Dakota said: "The people had seven years to consider the ERA, and they rejected it. To sneak it into the Constitution through this illegal process would undermine the very basis of our constitutional order."

Some conservative groups have also raised concerns that the ERA, if approved, could bolster laws supporting issues they oppose, like abortion and same-sex marriage.

But supporters remain undeterred. On Tuesday, the group Equal Means Equal filed a lawsuit to challenge the deadline imposed by Congress. They argue deadlines imposed by Congress weren't included in the text of the ERA and, therefore, aren't constitutionally binding.

Kamala Lopez is a founding member of Equal Means Equal. Lopez said: "In 1923, Alice Paul wrote the Equal Rights Amendment and we have been fighting ever since in this country, just to be recognized as human beings. It's really amazing that it's taken almost 100 years for very basic civil and human rights to be provided to women, the way they are provided in 185 countries all over the world. There are women who started in the 1970s to fight for this — in the 1960s who are now in their 80s and 90s, and this day is so important for them, because they never thought they'd see the day."