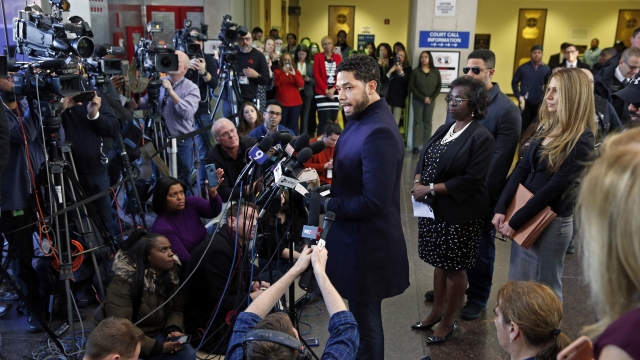 Smollett's character leaving the show might not be a surprise after a scandal involving the actor earlier this year, but it was unclear just how he'd be written off. The character's last appearance was at his own wedding in episode 16 of the Fox show's fifth season.

And then, "Out of nowhere, he's snatched away from us." That's according to Terrence Howard, who plays Jamal Lyon's father in the show. Howard told James Cordon on Tuesday night that Smollett was "the heart of our show, and now it's like our show is on a heart-and-lung-bypass machine. The heart is gone, but we're still hoping that there's going to be a transplant and hoping somehow it'll come back together."

Well, instead of killing the character off, it turns out the writers just moved Jamal Lyon. The characters Becky Williams — played by Gabourey Sidibe — and Cookie Lyon — Taraji P. Henson — mentioned his move in the season premiere. Spoiler alert: Here's a clip from that episode.

Becky commented on her onesie pajamas: "Jamal and I used to wear these to our sleepovers all the time." Cookie said, "No wonder that boy ran off to London." Becky said, "I really miss him," and Cookie responded: "Please don't get me started. I miss him so much. Anyways..."

And that's all that was mentioned of Smollett's character before the conversation shifted focus.

Smollett was was accused of filing a false police report in Chicago in January. After an investigation, police said he'd staged a racist and homophobic attack and reported it to the authorities in order to garner more publicity and possibly a pay raise on "Empire."

Lee Daniels, the show's co-creator, has dismissed reports about Smollett possibly returning. He told Vulture in June that the scandal "certainly ... played a major part" in the show being canceled after its sixth season.

But there could be more to the Lyon family's story. Daniels said while "Empire" is over in its current iteration, the writers are working on a potential spin-off.

As for Smollett, his legal team still says he did not stage a hate crime. The felony charges against him were dropped in March, but a special prosecutor was appointed to investigate the alleged attack and how officials handled the investigation afterward. Smollett is also still fighting a lawsuit filed by the city of Chicago that's expected to go to trial next year. The city is demanding reimbursement for the costs of investigating what it says was a fake attack.