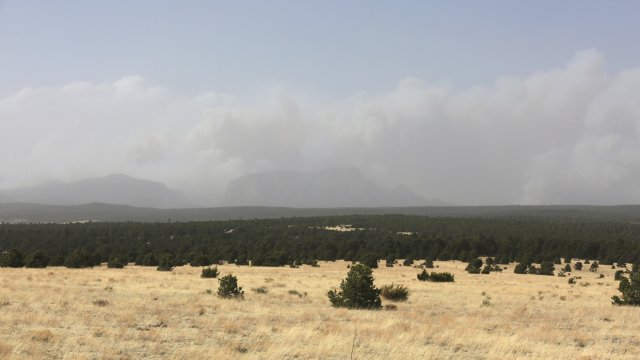 One wildfire in northern New Mexico that started April 6 merged with a newer fire Saturday to form the second-largest blaze in the state at more than 66 square miles, leading to widespread evacuations in Mora and San Miguel counties.

Another wind-driven wildfire in northern New Mexico that began April 17 has charred at least 76 square miles of ponderosa pine, oak brush and grass north of Ocate, an unincorporated community in Mora County.

Meanwhile in Arizona, some residents forced to evacuate due to a wildfire near Flagstaff were allowed to return home Sunday morning.

Fire officials were expecting the northern wildfires to slow Sunday as cloud and smoke cover moves in, allowing the forests to retain more moisture. But they added that the interior portions of the fires could show moderate to extreme behavior, which could threaten structures in those areas.

More than 200 structures have been charred by the wildfires thus far and an additional 900 remain threatened, Lujan Grisham said.

Fire management officials said an exact damage count was unclear because it’s still too dangerous for crews to go in and look at all the homes that have been lost.

“We do not know the magnitude of the structure loss. We don’t even know the areas where most homes made it through the fire, where homes haven’t been damaged or anything like that,” said operation sections chief Jayson Coil.

Some 1,000 firefighters were battling the wildfires across New Mexico, which already has secured about $3 million in grants to help with the fires.

Lujan Grisham said she has asked the White House for more federal resources and she’s calling for a ban of fireworks statewide.

“We need more federal bodies for firefighting, fire mitigation, public safety support on the ground in New Mexico,” she said. “It’s going to be a tough summer. So that’s why we are banning fires. And that is why on Monday I will be asking every local government to be thinking about ways to ban the sales of fireworks.”

Wildfire has become a year-round threat in the West given changing conditions that include earlier snowmelt and rain coming later in the fall, scientist have said. The problems have been exacerbated by decades of fire suppression and poor management along with a more than 20-year megadrought that studies link to human-caused climate change.

The fire near Flagstaff was at 32 square miles as of Saturday night. It forced the evacuation of 766 homes and burned down 30 homes and two dozen other structures since it began a week ago, according to county authorities.

Arizona Gov. Doug Ducey declared the fire a state of emergency Friday for Coconino County to free up recovery aid to affected communities.

The wildfire near Prescott began last Monday and was at 4.8 square miles and 15% contained as of Sunday morning as helicopters and air tankers dropped water and retardant to slow the fire’s growth.

The cause of the wildfires in New Mexico and Arizona remain under investigation.