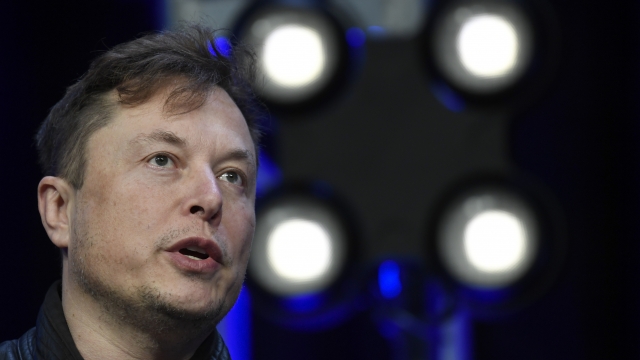 Musk, who bought Twitter for $44 billion, sold 19.5 million shares of the electric car company from Nov. 4 to Nov. 8, according to Tuesday's filings with the Securities and Exchange Commission.

The takeover of Twitter has not been smooth and the social media platform has seen the exodus of some big advertisers in recent weeks including United Airlines, General Motors, REI, General Mills and Audi.

Musk acknowledged "a massive drop in revenue" at Twitter, which heavily relies on advertising to make money.

Musk had signaled that he was done selling Tesla shares and the revelation that those sales continue left some industry analysts exasperated.

Musk is preparing for a legal battle with Twitter, which is attempting to force the Tesla CEO to follow through on his deal to acquire the company.

"Our fear heading into the final days of the deal was that Musk was going to be forced to sell more Tesla stock to fund the disaster Twitter deal and ultimately those fears came true which speaks to some of the massive selling pressures on the stock of late," wrote Daniel Ives at Wedbush. "For Musk who multiple times over the past year has said he is 'done selling Tesla stock' yet again loses more credibility with investors and his loyalists in a boy who cried wolf moment."

Most of Musk's wealth is tied up in shares of Tesla Inc. On Tuesday, his personal net worth dropped below $200 billion, according to Forbes, but he is still the world's richest person.

Musk had lined up banks including Morgan Stanley to help finance the Twitter deal. His original share of the deal was about $15.5 billion, Ives estimated. But if equity investors dropped out, Musk would be on the hook to replace them or throw in more of his own money.

"The Twitter circus show has been an absolute debacle from all angles since Musk bought the platform for all the world to see: from the 50% layoffs and then bringing back some workers, to the head scratching verification roll-out to users which many are pushing back on, to the constant tweeting in this political firestorm backdrop, and now.....selling more TSLA stock," Ives wrote. "When does it end?"

Shares of Tesla Inc., which were flat before the opening bell Wednesday, have fallen 8% this week and are down 46% this year, far outpacing broader market declines in what has been a dreadful year for investors.

For markets to really turn higher, analysts say investors will need to see a break from the high inflation that's swept the world.