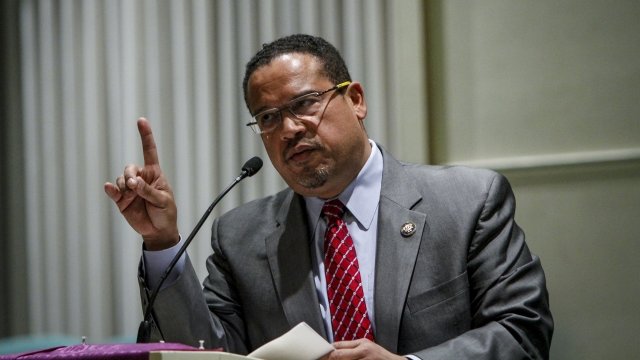 U.S. Rep. Keith Ellison said he plans to ask the House Ethics Committee to investigate an abuse allegation made by his former girlfriend.

Back in August, the son of Ellison's ex-girlfriend, Karen Monahan, said he'd seen a video of Ellison dragging his mother off a bed while screaming profanities at her. Monahan later confirmed the allegation, and told CNN she suffered both emotional and physical abuse while she was dating Ellison.

The Democratic lawmaker continued to deny the claims Wednesday, saying he was asking for a House investigation "because I am innocent and eager to see this entire matter resolved."

Ellison's request came after several of his colleagues in Congress as well as the Democratic National Committee said such an inquiry should happen.

Minnesota's Democratic Party is already conducting its own investigation. Its chairman told The Associated Press that he hopes the party will issue its final report "soon."

Ellison is currently running for Minnesota attorney general. He's facing off against Republican Doug Wardlow in the November general election.