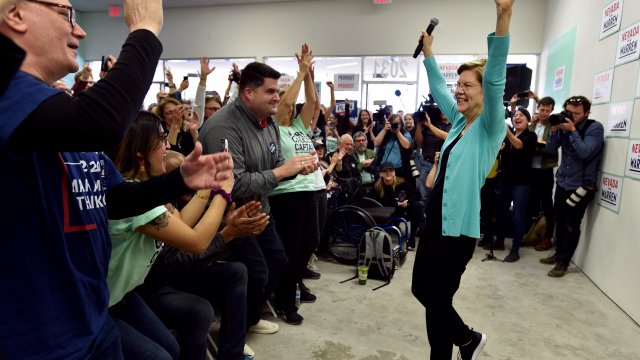 "I have really had it with billionaires, regardless of party, who think that the rules don't apply to them," Warren said.

Instead of sticking to her regular claim of being the unifying force for a divided Democratic Party, Warren aggressively went after her rivals — Mike Bloomberg and Bernie Sanders.

"Understand this about Michael Bloomberg — he believes that because he’s a billionaire he can just buy an election," Warren said.

Warren's campaign said it raised millions of dollars since the debate — its best fundraising day ever. Warren hopes her performance will give her a much-needed boost after weak finishes in both Iowa and New Hampshire.

"All I can say is we're just getting started," Warren said.

Supporters in Las Vegas echoed that.

"She's a fighter. She can go up against Trump and win," said Cindy Swanbeck, a Warren supporter.

"It was amazing she totally crushed it. I loved her energy and I just thanked her right here for always giving 100%, persisting, and that’s the amount of energy I’m going to give her on caucus day on Saturday," said Ashley Lesieur, a Warren supporter.