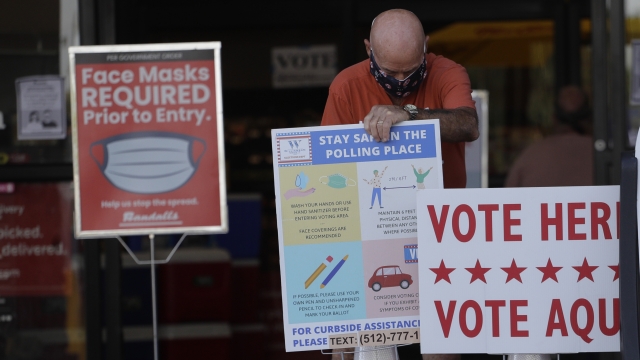 Election security experts are painting a grim picture of where the country stands, less than 100 days before the general election.

Newsy spoke to experts in areas where the largest vulnerabilities lie, as the coronavirus pandemic poses new challenges. We started with mail-in voting, an option many Americans may choose out of safety concerns.

"We are in store for a lot of chaos and confusion on Election Day if we don't take quick action," says Myrna Pérez, director of voting rights & elections at the Brennan Center for Justice.

The $4 billion that election advocacy groups have called for hasn’t been allocated by Congress to states.

"So they are making choices about whether or not they're going to provide postage from vote by mail ballots or whether or not they have the money to send mail ballot applications," Pérez says. "We also have some states that are extraordinarily rigid in a way that has been found to be discriminatory about how they actually count the mail ballots that they've seen."

Something else we may not have enough of: election workers, who tend to be over the age of 60, an at-risk population for the coronavirus.

"We're going to need hundreds of thousands of new poll workers to volunteer and serve our democracy, not just on Election Day, but also for early voting and for processing of mail ballots. That's going to be a challenge," says David Becker, executive director and founder of the Center for Election Innovation & Research.

Polling sites themselves will be tested on Nov. 3.

"The number of polling sites that are appropriate is much less than what we've seen in the past because we need sites that are large enough that can accommodate social distancing," Becker says.

And when it comes to the country’s general election infrastructure, items like voting machines and databases with voter information:

"We really have just done the bare minimum and not really tackled the difficult security issues that really need to be addressed in this country overall," Susan Greenhalgh, a senior adviser on election security at Free Speech For People says. "We still have states that are using very old machines that are outdated machines that are running outdated software that don't have security updates. We also have machines that still don't produce a paper ballot."

Cybersecurity experts say states and localities have taken significant steps since 2016, but they often fall short.

"This is really basic stuff, like making sure you've got all the security patches installed on your systems, making sure you have decent passwords, using two-factor authentication. And from an attacker's perspective, that's the low hanging fruit that's been taken away from them," says Dan Wallach, a computer science professor at Rice University. "It might be that with all the publicity of Russia trying to tamper with our elections, other countries might want to get in on the game, too. You know, why should Russia have all the fun?"

The last question Newsy asked of a disinformation expert: How prepared are we for an onslaught of falsities on social media? And there, a hint of progress.

"I think we are as a society, better prepared in 2020 than we were in 2016. Part of that is the platforms themselves, they're more aware of the problem and they've made some changes," says Kate Starbird, an associate professor at University of Washington. They're definitely trying to identify foreign operations, and developing policies to dampen some of the more domestic operations as well. The efforts to manipulate us are going to be more sophisticated in 2020 than they were in 2016. But my hope is that we were so naive in 2016, the platforms were naive, individuals were naive, our government was naive. I think we are all collectively more sophisticated ourselves."

Despite the enormous obstacles, states continue to prepare — some making strides and others hoping time will allot them some fixes.