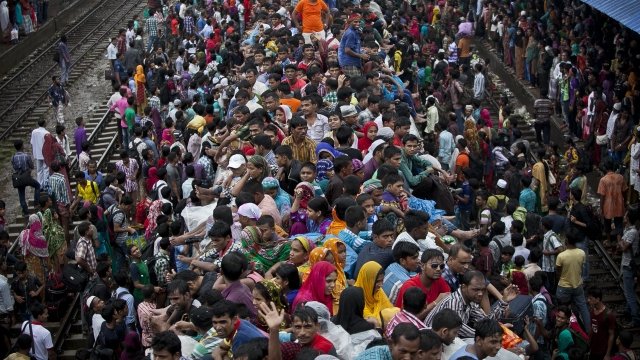 By Melissa Prax
December 28, 2018
We speak to a first-time voter in Bangladesh about why he's unsure his vote will matter.
SHOW TRANSCRIPT

Voters in Bangladesh will be heading to the polls on Dec. 30, and political campaigns are viewing young people as especially important for this election.

Bangladesh's Bureau of Statistics shows people between 18 and 30 make up nearly one-third of the country's registered voters. 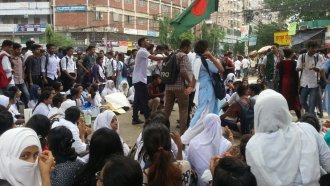 How Women Impacted The Bangladeshi Student Movement For Safe Roads

Fahim Shahriar is 24 and about to vote for the first time.

"The main thing that we're actually thinking are main issues like getting jobs, safe roads and reducing the poverty," Shahriar said.

But while he identifies issues that are important to people in the country, he isn't convinced his vote will make much of a difference.

The country's last election was in 2014, but because the main opposition party sat out, it was seen by some as illegitimate. That's a concern voters and watchdogs have going into this election.

"The election is framed by Awami [League party]. Like they know they will win, and they have the most power of the parties. Actually Awami has the strongest political organizational power in Bangladesh. They have a lot of workers for their party. But then the opposition side, Bangladesh Nationalist Party, doesn't have, because BNP is the opponent party. They don't have much workers for their party."

The Awami League counts among its members the current prime minister, Sheikh Hasina.

Some Awami League lawmakers were criticized over the handling of youth-led protests over the summer, especially after violent crackdowns. Those demonstrations, which included a movement to enforce traffic laws and make roads safer, suggest young people in Bangladesh are motivated to create change. But many of the protests' participants are still too young to cast ballots this year, as the voting age in Bangladesh is 18.

But those who are of voting age, like Shahriar, point out another concern: that the elections won't be free and fair. They're worried at least partly because experts say the country doesn't have an independent election commission. The Bangladesh Nationalist Party says that gives Awami League an unfair advantage.

The U.S. Embassy in Dhaka announced observers would assist with the Dec. 30 election, but said that those observer's visas weren't approved in time.

The Bangladesh government said the election should be a concern for Bangladesh, not other countries.

The U.S. Embassy in Dhaka said, "All parties have been victims of violence, including minorities and female candidates. However, it appears opposition party candidates have borne the brunt of most violence."

"What do you hope to see an election look like in your country?" Newsy's Melissa Prax asked.

Shahriar answered: "Obviously a level playing field for every party. ... If you go throughout the history, the prime minister has been elected, like, [for a] fourth or fifth time in Bangladesh. I don't like this process. I want that a person can be a prime minister for two times, like the U.S. is. That way there won't be as much corruption."