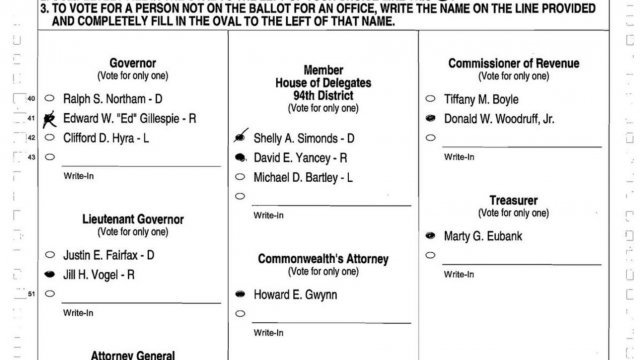 The Virginia State Board of Elections has delayed a drawing that would have decided the state's House of Delegates race.

That's because lawyers for Democratic candidate Shelly Simonds have asked the courts to reconsider allowing the one ballot that turned a very close race into a tie.

Simonds and Republican David Yancey were scheduled to have their names drawn out of a bowl to determine a winner Wednesday. But after receiving a letter from Simonds' lawyers asking them to wait, the Board of Elections canceled the drawing.

The ballot in question had bubbles filled in for both Simonds and Yancey, but the bubble for Simonds was crossed out. Judges ruled the voter intended to vote for Yancey. But that's not what Simonds' lawyers are questioning.

They say the recount that initially declared Simonds a winner should not have been challenged due to timing issues and that doing so violated Virginia law.

And there's a lot riding on this one race; if Simonds wins, it will split Virginia's House 50-50 and break Republicans' hold on the chamber for the first time in more than two decades.