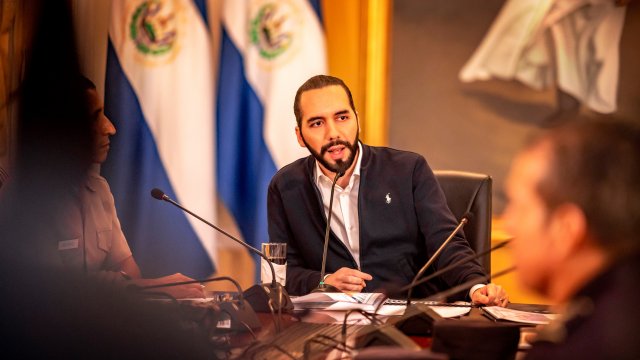 El Salvadoran president Nayib Bukele released a statement on Twitter. It said the country recognizes Guaidó as Venezuela's head of state. It also said Venezuelan diplomats from the regime of embattled Venezuelan President Nicolás Maduro are expelled.The foreign ministry gave them 48 hours to leave the country, and said in the "near future" El Salvador would accept a new Venezuelan diplomatic corps, chosen by Guaidó. Guaidó tweeted his thanks for the support, calling the move a huge backing to the Venezuelan cause.

Maduro's government granted its diplomatic staff 48 hours to return to Venezuela, according to a statement. But Bukele said his government never appointed an official to its Venezuelan embassy. He tweeted saying "The Maduro regime has just expelled officials appointed 100% by the Government of Sánchez Cerén," the former president of El Salvador.

Maduro's government also said Bukele assumed the "sad pawn role of US foreign policy." Maduro has long claimed those who oppose him are backed by foreign powers rather than a domestic resistance to his leadership.

El Salvador's declaration comes after Washington announced a year-long extension of temporary protections for El Salvadorans living in the U.S. Following El Salvador's announcement, the U.S. ambassador to El Salvador tweeted, saying the country is on the right side of history by recognizing Guaidó. Maduro is accused of rigging Venezuela's 2018 election, as well as violently cracking down on protests against his regime.