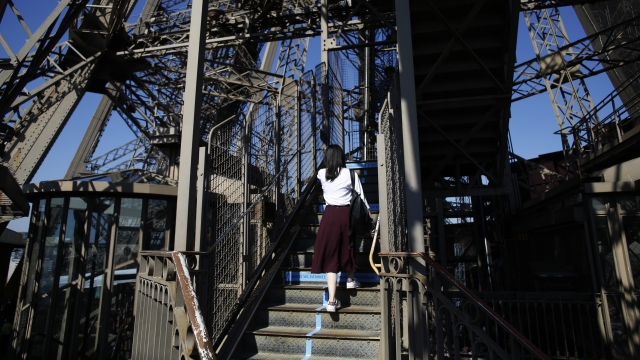 SMS
Eiffel Tower Reopens As France Plans To Screen 1.3M For COVID-19
By Katherine Biek
By Katherine Biek
June 25, 2020
The tower was closed for 104 days, marking the longest its been shut down since World War II.
SHOW TRANSCRIPT

Tourists were spotted climbing the stairs of the Eiffel Tower Thursday, as the French landmark opened back up to the public.

The tower is the most-visited monument in the world. But it closed back in March just before the country imposed a nationwide coronavirus lockdown.

Since then, 104 days have passed, marking the longest the tower has been closed since World War II. The landmark's director general estimates it lost roughly $30 million in revenue during its lockdown.

But just because the tower's first two levels are now open, doesn't mean there aren't still restrictions in place. All visitors over the age of 11 have to wear face masks, and officials have set up designated entrance and exit points to make sure people don't cross paths while climbing the tower. Its elevators and observation deck are off limits until next month.

France's daily count of new coronavirus cases fell below 100 on Wednesday — marking the first time this has happened since early March. But in an effort to ward off a potential next wave of infections, officials plan to launch a campaign to screen roughly 1.3 million people in the Paris region for COVID-19.

France's health minister told a local newspaper that the goal of the campaign is to "identify potentially dormant clusters." He said the country will first focus on screening residents in 30 towns near where current coronavirus clusters are located.