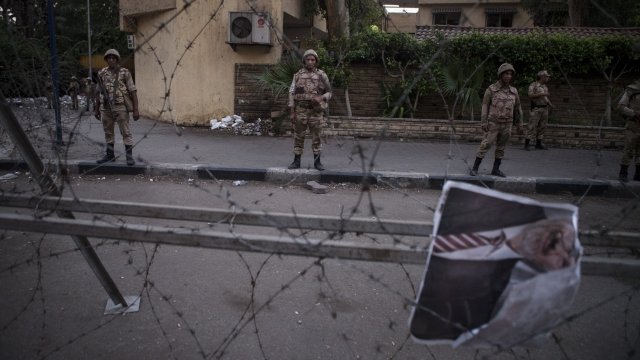 SMS
Egypt Sentences 75 People To Death For 2013 Coup Protest
By Ethan Weston
By Ethan Weston
September 8, 2018
Another 47 people were sentenced to life in prison.
SHOW TRANSCRIPT

Egypt has reportedly sentenced 75 people to death for their involvement in a 2013 protest against the ouster of President Mohammed Morsi.

The Egyptian military ousted Morsi back in 2013, saying he failed to fulfill "the hope for a national consensus." Egypt's current president and then-Gen. Abdel Fattah el-Sisi led the coup.

The New York Times reports 739 people were facing charges related to the protests. Many of those sentenced were members of or affiliated with the Muslim Brotherhood, an Islamist political group.

Human Rights Watch estimates at least 817 people were killed during one day of the 2013 protest when Egyptian security forces attacked the sit-in demonstration.

In addition to the 75 death sentences, another 47 people received life in prison — including the Muslim Brotherhood's spiritual leader, Mohammed Badie.