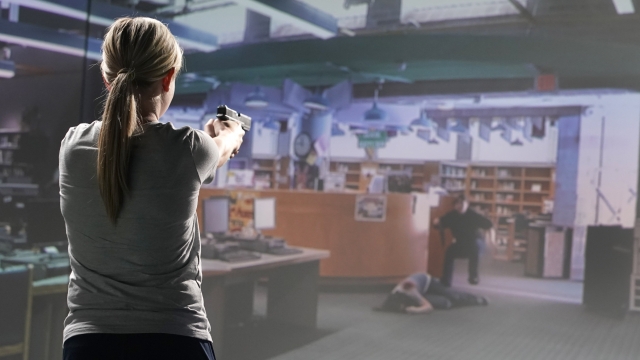 Active shooter drills have become a ubiquitous part of American school systems. By the 2015-16 school year, 95% of schools were conducting some sort of lockdown procedure.

But two of the country's largest teachers unions released a report Tuesday suggesting schools rethink how they conduct active shooter drills for students — if they do them at all.

1. Drills should not include simulations that mimic an actual incident;

2. Parents should have advance notice of drills;

3. Drills should be announced to students and educators prior to the start;

with the involvement of school personnel, including school-based mental

5. Schools should couple drills with trauma-informed approaches to address

6. Track data about the efficacy and effects of drills.

One of the reasons the groups are making these suggestions is because health professionals say students could suffer some sort of trauma because of these drills.

ALICE Training Institute, an active shooter training company that has given instruction to thousands of school districts, said in an exclusive statement to Newsy they agree with most of the previously mentioned recommendations: "ALICE is extremely supportive of giving parents and students advance notice, tracking with data, considering the holistic person, and ensuring every drill is catered to the individuals age and ability. However, we believe that, when done appropriately, drills that simulate an event and allow students to practice their options, whether that be lockdown or evacuation, are the most effective."

Effectiveness is another reason some groups are skeptical of active shooter drills. Everytown and the two teachers unions are advocating for more research. Meanwhile, the school security industry market is expected to grow to $2.8 billion by 2021.

School shootings are rare and they account for a small fraction of nearly 3,000 children and teens shot and killed every year. But the number of students potentially traumatized by those shootings since the attack at Columbine in 1999 is in the hundreds of thousands, according to the Washington Post.

"Red flag laws" allow law enforcement to take firearms from a person deemed a danger to themselves or others after a judge examines proof of that claim.

ALICE's CEO added in his statement to Newsy: "These issues are ever evolving, and we applaud Everytown and its partners for issuing this important research."