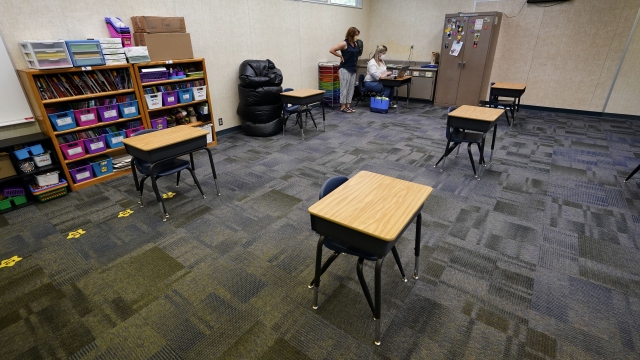 SMS
Education Takes Higher Profile In 2020 Election
By Amy Morona
By Amy Morona
September 7, 2020
Historically, education has been a big issue for voters. But it hasn't always gotten much attention during presidential campaigns.
SHOW TRANSCRIPT

Historically, education has been a big issue for voters. But it hasn't always gotten much attention during presidential campaigns.

"It's mostly seen as a local issue, that it's something that school boards handle and to some degree states," said Doug Harris, the Schlieder Foundation chair in public education at Tulane University. "But presidential elections are usually more about international affairs and defense."

But that may change this year.

"It's hard to open the newspaper and not read something on the front page of almost every paper in the country about what schools are doing," Harris said. "Schools have never gotten as much attention before."

The discussion over safely reopening K through 12 schools in light of the coronavirus has been a top issue both for President Donald Trump and Democratic nominee Joe Biden.

"They think it's going to be good for them politically, so they keep the schools closed," President Trump said in July. "No way. So we're very much going to put pressure on governors and everybody else to open the schools."

"Mr. President, where are you?" Biden asked on Sept. 2. "Where are you? Why aren't you working on this? We need emergency support funding for our schools, and we need it now."

A recent poll found 58 percent of Americans said education is a very important issue to them.

"We're in the midst of reopening both on college campuses and in schools, everything is super heightened," said Maria Voles Ferguson, executive director of the Center on Education Policy at George Washington University. "And that's probably going to continue until Election Day. I think what happens after that is really going to tell the tale, but the impact of COVID on schools is going to go way beyond that."

And while most of the focus right now is on the coronavirus' impact on education, there are also other issues — and people — contributing to the national conversation.

One of them is Education Secretary Betsy DeVos, who has been condemned — and sued — by teachers unions, national organizations and states during her time in office.

Both DeVos and the president have championed school choice, which gives families other options outside of traditional public districts, like private or charter schools.

"I think that the role of the secretary of education has a little bit of a spotlight on it more now than it did in the past just because she is a polarizing figure," Ferguson said. "The current president has sort of gone out there on the campaign trail and said, 'If I win my next term, it's going to be all about school choice,' also a very divisive issue."

He's also married to an educator. Jill Biden kicked off a speaking tour of schools in eight battleground states earlier this month.