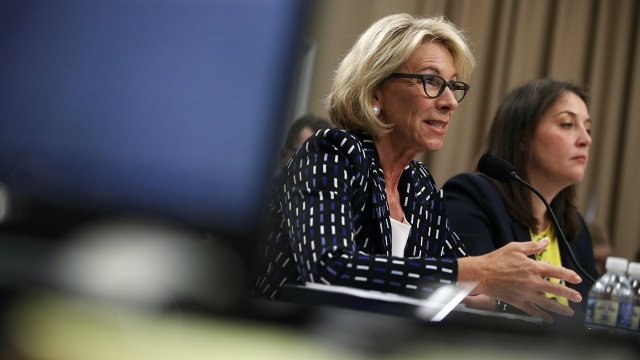 The Department of Education is reportedly looking into letting states use federal funds to buy guns for teachers.

According to The New York Times, a grants program in federal education law doesn't specifically prohibit weapons purchases. So Education Secretary Betsy DeVos could use that program to approve state or district plans to use those federal funds to pay for firearms and firearms training for schools.

But the Trump administration is disputing The Times' report. A senior administration official told CNN the idea didn't come from DeVos or the Education Department. The official said DeVos does want Congress to clarify whether schools can use federal funds to buy guns, though.

If the Education Department is looking into this, it would run counter to a move Congress made in March that allocated $50 million a year to schools for security but stated the money shouldn't be used to purchase weapons.

And the plan would likely face backlash, seeing as the Trump administration's call to give educators firearms has received a lot of criticism already.

A spokeswoman for the Education Department told multiple outlets that the department is "constantly considering and evaluating policy issues," especially those related to school safety. But she also said the department doesn't issue opinions on hypothetical scenarios.