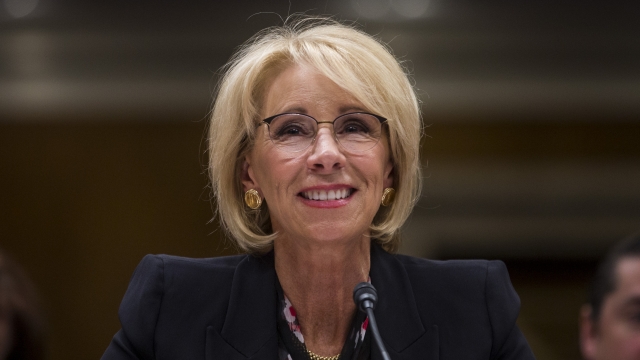 The stricter new rule involves loan forgiveness for students who believe they may have been defrauded by their colleges.

Education Secretary Betsy DeVos released a stricter new rule Friday on loan forgiveness for students who believe they may have been defrauded by their colleges.

She said the new rule will "treat students and taxpayers fairly." But critics say it will make it more difficult for borrowers to cancel their debt over claims they were deceived by for-profit colleges.

The new rule is a rewrite of Obama-era policies, which DeVos said weren't working. DeVos has said the old standards allowed students to get "free money" from the government.

The Department of Education said the new rule will save an estimated $11.1 billion over 10 years.

In a statement, DeVos said: "We believe this final rule corrects the wrongs of the 2016 rule through common sense and carefully crafted reforms that hold colleges and universities accountable and treat students and taxpayers fairly."

But the chairman of the House education committee says the new rule means that "schools can cheat [their] student borrowers and still reap the rewards of federal student aid."

The new rule "would apply to all federal student loans made on or after July 1, 2020."