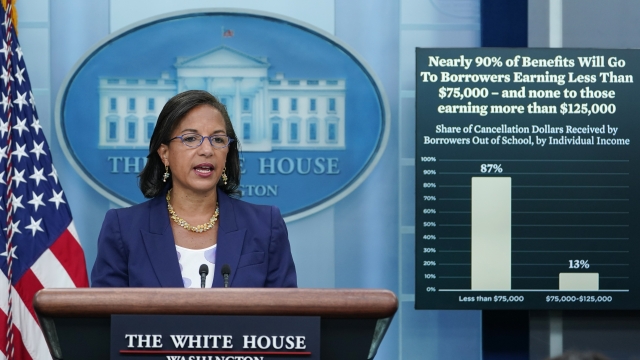 SMS
Some Economists Say Loan Forgiveness Plan Could Increase Inflation
By James Packard
By James Packard
August 24, 2022
Though the economist outlook varies, some say the Biden administration's plan to cancel some student loan debt could add to inflation rates.

The Biden administration’s plan to cancel tens of millions of dollars of student loan debt is ringing in the ears of college students.

"I've racked up a lot of debt, and it would be a huge financial blessing to get rid at least even a little bit of that," said Shruti Satish, an Ohio State University student.

"It just gives you more freedom to live your life if you don’t have that weighing it down," said Presley Hunt, a University of Kentucky student. "I think about it all the time: I know I’m going to be in debt probably for the rest of my life.”

President Joe Biden’s plan to forgive $10,000 in debt for borrowers making less than $125,000 a year and $20,000 for Pell Grant recipients is intended to help borrowers like Hunt and alleviate debt for millions more.

"About a third of borrowers have $10,000 or less and more than half have $20,000 or less, so for those borrowers, this could really take out all or a very large chunk of their federal student debt," said Collin Binkley, education reporter for the Associated Press.

But the plan has its critics on both sides.

"I am disappointed that this decision isn't really future-focused," said Ty Kiatathikom, an Ohio State University law student. "It's not going to do anything to lighten the load of future students, future generations of college students."

Critics on the right say it’s unfair to borrowers who worked to avoid debt or pay it off, and some fear the forgiveness will worsen inflation.

Depending on which expert you ask, the outlooks vary.

"This is a forgiveness that basically is for most loans that are paid out over a period of years," said economist Ray Perryman. "It’s not like someone is putting $10,000 in your pocket today and saying, 'You can go out and spend it.' It’s reducing your loan payments.”

Economist Andrew Butters sees the potential for the relief to somewhat increase inflation, but he says it's very possible those who are receiving this assistance are the ones disproportionately affected by the consequences of inflation.

Still, it's welcome news for many student borrowers, and now the Biden administration prepares for an almost-certain legal fight.

"It's just — right now — waiting to see who's going to file it and what the argument is going to be," Binkley said. "Presumably, it has to be someone who can say that they were personally injured as a result of this."