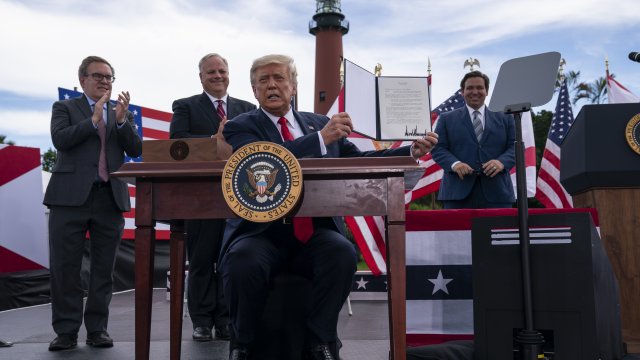 A signature of President Donald Trump’s time in office was his approach to environmental policy.

"Who would’ve thought, Trump is the great environmentalist?" Trump said at an event in September.

His four years in Washington included over 100 regulatory rollbacks, with a particular goal in mind: easing the burden on business. One key effort ended the Obama-era Clean Power Plan, which was tougher on power plant emissions than the Trump administration wanted to be.

"This was not only a victory for the working men and women of America. It’s a victory for low-cost, reliable electricity in America," said Murray Energy CEO Robert Murray said on Fox Business.

But the true economic impact is murky, at best. Despite a promise to revive coal, jobs in the industry were down 24% by the time his term ended. The same can be said for oil.

"We have an abundance of oil and gas in this country. And as a result, prices are low," Continental Resources CEO Harold Hamm said on Fox Business.

"It's actually resulted in these rollbacks not actually taking hold in the way they would have, had Trump had another four years," said risk and behavioral scientist Sweta Chakraborty.

With President Joe Biden in the White House, many of those rollbacks were reversed —including one move that got worldwide attention.

"We’re going to rejoin the Paris climate accord, as of today," President Biden said on the same day he was inaugurated.

Though Trump made the announcement in June 2017, he officially removed the U.S. from the accord on November 4, 2020 — the earliest possible date under the agreement. And in that time, global uncertainty abounded.

"It sent that signal that if the U.S. wasn't going to do anything, other countries didn't have to, either," Chakraborty said.

The decision was lauded by conservative scholars who said staying in the pact would cost too much. One study found it would lead to an aggregate GDP loss of over $2.5 trillion. But other experts say, even the symbolism of leaving had lasting damage.

"The intent to not move forward unquestionably set back our ability to protect our climate," said Anne Egelston, director of the Center for Environmental Studies at Tarleton State University.

In four years, Trump made significant changes to environmental regulation. But the Biden administration holds a much different view on environmental protection, already steering the U.S. on a path to prioritize fighting climate change.