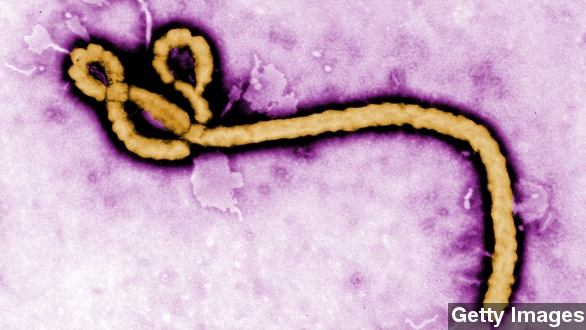 Health officials warn that without further intervention, the number of Ebola cases in Liberia and Sierra Leone could reach 1.4 million by January.

The Centers for Disease Control and Prevention has a grim outlook on the Ebola outbreak sweeping West Africa. It says without further intervention, the number of cases of in Liberia and Sierra Leone could reach 1.4 million by January.

The agency estimates cases could total between 550,000 and 1.4 million by then. Officials think the current count is underreported, which is why their estimate is given as such a wide range. (Video via CNN)

But the CDC says it's not too late to stop the disease from spreading.

"The outbreak could be stopped if 70% of Ebola cases are cared for in Ebola Treatment Units or ... in a community setting such that there is a reduced risk of disease transmission, assuming that safe burial practices are in place in both settings."

But some additional measures are being taken. President Obama has promised to build more treatment units in Liberia, which would add more than 1,000 beds. (Video via The White House)

And The New York Times reports the World Health Organization brought the good news that a new treatment center with 150 beds opened in Liberia's capital.

But those aren't the only obstacles officials are facing. Many health clinics and health workers helping those affected with Ebola are being attacked as some in the region believe the disease isn't real.

The virus is spread through bodily fluids such as saliva, through contaminated needles or by infected animals such as fruit bats.

According to WebMD, Ebola kills up to 90 percent of those infected.

The statistics for this outbreak have been lower, though. WHO said out of the estimated total of around 5,800 cases, around 2,800 have resulted in death. That means just under half who have contracted the disease have actually died.

But with news that up to 20,000 more could be infected by November and that the epidemic could go on for years without "rigorous infection control measures," the situation isn't looking good.

However, there has been some breakthrough in treatment.

There's ZMapp, an experimental treatment that might have played a role in the recovery of the Americans who contracted the virus while in Africa. However, this is not a readily available treatment option as it's still in the experimental phase.

Other than that, the CDC says catching it early can improve chances of survival. It also says it's important to get IV fluids, balance electrolytes, maintain oxygen status and blood pressure and treat other infections if they occur.

There currently is no medicine on the market approved to treat Ebola. The CDC's report says Ebola cases in Liberia are doubling about every 20 days.