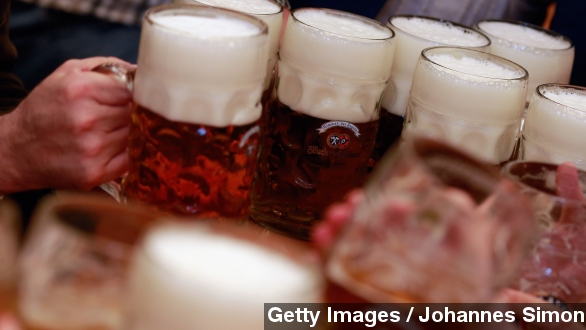 According to research published this week, we start hitting the booze more heavily after we've had a hefty gym session. That goes for the wide range of ages studied — from 18-89 years old.

That's right. Even mall walkers might be cracking open a cold one after a few laps. (Video via YouTube / DrBobShow1)

Study subjects recorded both their physical output and their alcoholic input through smartphone apps over 21-day stretches throughout a year. But wait a second — how are these two activities related?

According to researchers at Northwestern University's Feinberg School of Medicine, people increase both their physical activity and their alcohol consumption on certain days of each week, specifically Thursday to Sunday.

Also known as the weekend. You know, that favorite period of each week when you have more time to run around outside, play tennis with an old friend and have a cocktail or two at dinner.

According to the lead author of the study, David E. Conroy, another reason for the link "could be that people who are more physically active on a given day have to use all their willpower and cognitive resources to get themselves to be active, and they don't have enough willpower left to resist the temptation of a drink at the end of the day."

The study was published in the journal Health Psychology.