Early Mars May Have Been A Lot Like Early Earth 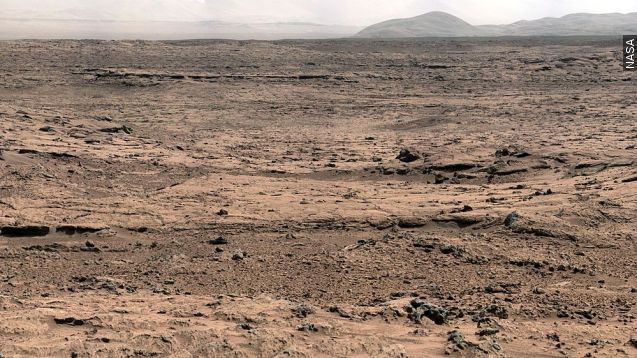 SMS
Early Mars May Have Been A Lot Like Early Earth
By Jake Godin
By Jake Godin
July 15, 2015
A new study published in Nature Geoscience says it has found evidence that the early crust of Mars may have been much like that of ancient Earth.
SHOW TRANSCRIPT

The Curiosity rover has been poking around the Gale crater on Mars for a few years now, and it turns out the place may be more similar to Earth than we originally thought. (Video via NASA)

Using rock data gathered by Curiosity, a recent study published in Nature Geoscience found that many of the rocks in the crater had similar chemical makeup to ones found in Earth's crust.

The crust of a planet is its outermost layer — what you're standing on now. The rock on land, or the continental crust, is typically lighter than what you'd find deeper in the oceans, or the oceanic crust.

The paper's international team of authors say they've found evidence of this continental crust on Mars, which is new. A writer at Popular Science explains:

"Scientists thought for a long time that Earth was the only planet with a continental crust, because typically it takes a very long time on a very active planet for the lighter rocks to rise to the surface and form into the chunks that make up the continental crust."

The team used data from a total of 22 Martian rock samples, some of which was gathered using Curiosity's ChemCam — a laser that the rover shoots at rocks to gather reveal chemical makeup.

The discovery will help with our understanding of not only the history of Mars as a planet, but also the makeup of parts of the planet unexplored by terrestrial rovers such as Curiosity.