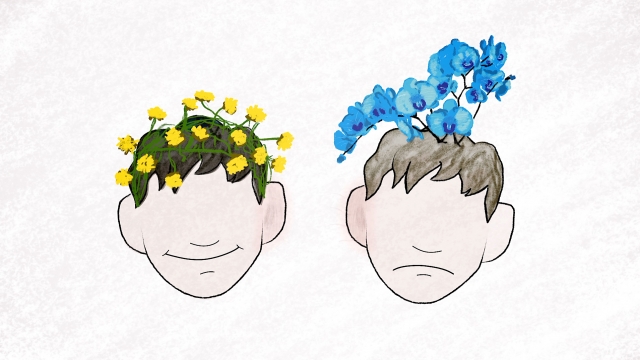 Our temperament might be more rooted in our biology than we think.

Growing up, we're all flower children. Not the hippy-dippy kind. Scientists measured brain activity and found some kids are "dandelions" and about one in five are "orchids."

Dandelions are naturally resilient, like their namesake. Nothing gets them down for long. They bounce back, seemingly stronger. Orchid children are, in a word, sensitive. They find comfort in routine and have a negative reaction to change. They're often picky eaters and tend to be introverts. They need nurturing and special care, like an orchid, and have the best or worst outcomes. They're also more susceptible to depression and anxiety. That pattern alone is interesting, but what's going on inside an orchid child is even more intriguing — specifically, what’s happening inside the ear.

Research shows that orchid kids have a higher temperature in their right inner ear than other kids. (It's usually higher on the left.) This apparently is because of an active prefrontal cortex, which is immediately behind the forehead. Here's the brain-blood-emotional connection: The right eardrum and the brain's right cerebral prefrontal cortex use the same blood supply. More blood is flowing into the right prefrontal cortex in orchid children, sending oxygen to neurons that are working hard to regulate emotions. Scientists believe the higher ear temp indicates more activity — remember the higher rates of anxiety and depression.

Their actual perception of the world and processing it emotionally are often different. Was the finding just a fluke? Nope. Professors also inspected a group of monkeys and found the same thing. Monkeys that were more prone to stress and sensitivity had right ears with higher temperatures. With natural differences in disposition in mind, dandelions and orchids both need love and support. The main difference from a parenting perspective is the degree and type of support each needs.

What Myers Briggs Does (and Doesn't) Say About Your Personality

Myers Briggs is fun but is it scientific?

Sometimes an orchid needs protection. Sometimes they need a prod to take a risk. Same for dandelions.There are differences in kids, but the universal truth is a rich, loving environment with attentive caregivers is the best place to bloom.