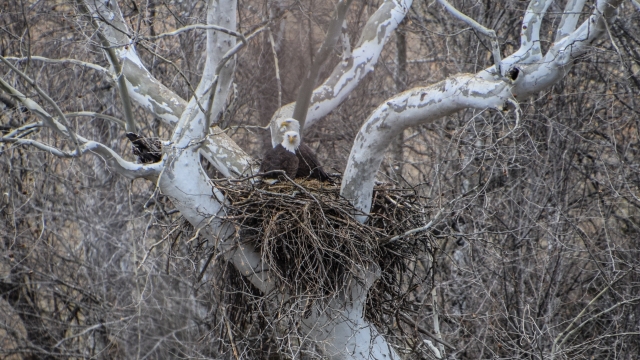 "It's just amazing to watch them fly," Edward Whitmore said.

They're two of hundreds of bald-eagle watchers in the state of Missouri.

"It's just amazing when you see those little eaglets heads pop up and everybody's like, woo, look at that," Debbie Whitmore said.

Ever since laws and regulations were put in place which protect them from being bought and sold and also killed, America's bald eagle population has taken off.

According to a report from the U.S. Fish and Wildlife Service, the bald eagle population has quadrupled since 2009. It's estimated there are now more than 71,000 nesting pairs and more than 300,000 bald eagles in the lower 48 states.

Nesting pairs hit a low point in 1963 with only 417 on record. They were once on the brink of extinction, later taken off the endangered species list in 2007 after making a comeback. However, they’re still protected under the Bald and Golden Eagle Protection Act and the Migratory Bird Treaty Act.

"They just signify so much to our nation, freedom, courage, strength, independence. Just majestic birds."

The bald-eagle monitoring program started in 2018 and has grown since then with more than 200 volunteers across the state. They're always looking for volunteers — anyone can sign up to observe a nest.

"And report back to me, it's like, hey, you know, we got an adult on the nest," Haslerig said. "We got to eaglets, you know, or maybe the nest has fallen down. You know, we need to know about that."

She says they've counted more than 500 active eagle nests in the state. This number wouldn't be possible without help from the hundreds of volunteers like the Whitmores and Bruce Paneitz.

"I was one of the first people to join the monitoring program," Paneitz said. "I've always had an affection for eagles since I seen my first one, and I've always shot a lot of pictures of them. I like to do nature photography as a hobby."

"Not every American has ever seen our national symbol," Edward Whitmore said. "I still get thrilled every time I see one."