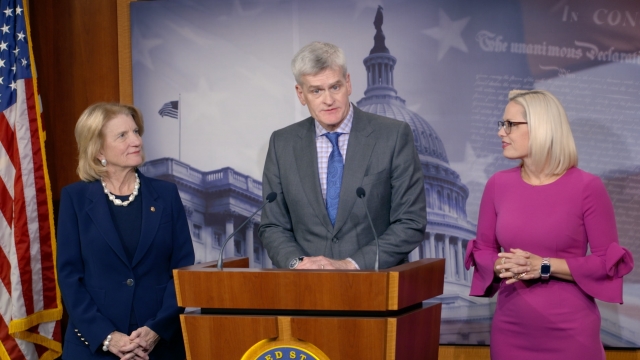 SMS
Paid Family Leave Takes Center Stage Ahead of 2020
By Amber Strong
By Amber Strong
December 6, 2019
Members of Congress want to tackle paid family leave. So does the White House. Can the two sides come together?
SHOW TRANSCRIPT

“I would pass paid family leave as one of the first things we do.”

From the campaign trail to the White House and Capitol Hill the topic of paid family leave is front and center.

There are a number of proposals here on the Hill working to ensure that new parents get to spend more time with their children. But which one actually has the ability to make it past a divided Congress and hit the president’s desk?

“We are the only bill which is bipartisan. Period. End of story.”

That new proposal from Senators Bill Cassidy and Kyrsten Sinema would allow new parents to take advantage of the child tax credit passed as part of the 2017 tax reform bill.

Parents would be eligible for up to $5000 up front for expenses or childcare costs. In turn they would receive $500 less in tax credits over the next decade.

“This does not raise taxes, It does not have mandates.”

Trump, who has been making the rounds here on the hill pushing for paid leave, told Newsy, “Never before has this issue had so much support and I will continue to relentlessly advocate to advance policies that will benefit working families across the country.”

On the flip side, most of the democratic presidential candidates support some form of Senator Kirsten Gillebrand’s Family Act.

Her plan provides 12 weeks of partial paid family leave and medical leave to care for sick family members. The money comes from a tax on employees and employers. It also creates an Office of Paid Medical Leave working under the Social Security Administration.

“It shouldn't be so hard. So many workers around the country have new children, sick spouses, elderly parents and they need access to paid leave.”

All sides seem to agree on one thing, new parents need more time to spend with their children. It’s how to go about it, that’s the question.