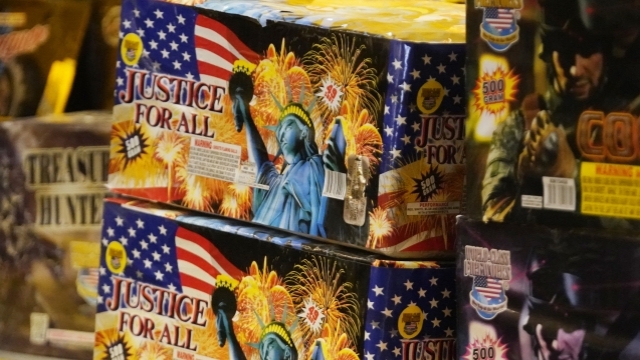 There's nothing more Fourth of July than the rocket's red glare, the bombs bursting in air.

But this year, America's birthday celebration is changing with the times.

Dozens of cities, in states from California to Texas to Florida, are replacing fireworks with drones. Hundreds of them will be synchronized and swooping into formations like the Statue of Liberty, an eagle, and, yes, even a drone version of a firework.

Graham Hill and Jacob Gould run Hire UAV Pro in Denver. Their business this year is booming in places where fireworks are not.

"We've been contacted by hundreds of municipalities for the Fourth of July. We probably had to turn away probably 300 or 400 cities," Hill said.

They've been busy fine-tuning, getting ready for half a dozen shows over the July Fourth weekend.

"As you can see behind us, everything is holding in perfect formation. We're just making sure that everything is staying really well-connected to the system. In an actual show, we'll have 100, 200, sometimes 300 drones," Hill said.

This year they've been hired by the town of Parker, Colorado, where Brooke Spain, the events manager, is planning the Fourth of July event for 15,000 people.

She says between this year's extreme drought and wildfire threat, fireworks just weren't going to fly.

"We were really bummed. It was a hard decision to make. I think when people understand that safety is the No. 1 concern for our community and the record heat lately, I think they understand."

NEWSY'S CLAYTON SANDELL: Fireworks are great. Not burning down the town, also great.

SANDELL: Somebody in the fireworks industry said "drones are pretty, but they're boring." Are those fighting words?

GRAHAM HILL: Not fighting words. We don't want to start a war with anybody in the pyro. I still think pyro is really cool. But I think it's just unrealistic for them to do it in certain areas, and that's where we're filling the gap.

Already big at the Olympics and the Super Bowl, drones are about to go next level, thanks to restaurant entrepreneur and philanthropist Kimbal Musk. He is the CEO of Nova Sky Stories.

"I think that fireworks are awesome, but they are simply a thing of the past in the Western side of the United States," Musk said.

Musk says he was inspired by the way drones brought the Burning Man back to life in Nevada, when the pandemic shut the festival down. He's now launching a brand new company working with artists and a fleet of 9,000 drones to tell stories in the sky — and not just during the Fourth of July.

"It's about the story. It's about the art. And I believe this is the greatest new art medium since the moving picture in the '20s,100 years ago. Our mission is to bring art to the skies of every town and city in the world," Musk said.

Back in Parker, there's some disappointment when people hear fireworks this year are out.

"What do you mean, 'drones'?," local resident Reanna Knoch said. "That saddens me deeply."

Other residents say they get it.

SANDELL: Can you have Fourth of July without fireworks?

PARKER RESIDENT AMY LACOUTURE: Yeah, I think so. Our state has had issues with fire so I think it's important to not do them.

PARKER RESIDENT KATIE FRAZIER: "It will be different, but it's a nice alternative rather than canceling everything altogether."

For this Fourth of July at least, drones are giving a glimpse of a firework-free future.