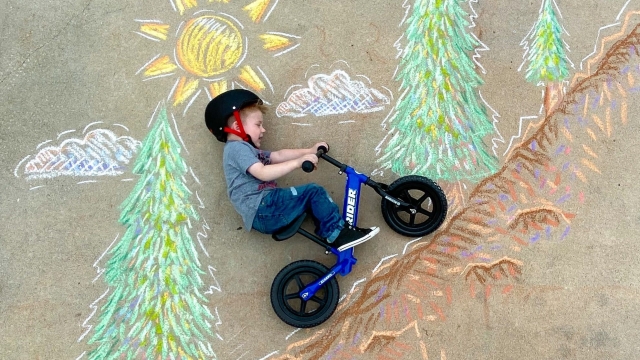 "I can remember sitting in the driveway when I was a little girl and just drawing, you know, whatever my imagination could think of," Cesily Badsky said.

And like his mother, 4-year-old Hendrix is also a fan.

When the coronavirus forced everyone indoors, their love for art actually took them outside to their driveway.

"It was really hard for us, you know, hard for everybody," Derek Badsky said.

"Normally we would be out and about and going to places like the zoo and, you know, some of the parks and things like that," Cesily Badsky.

So they found a different way to build memories through what she calls "chalk adventures."

"This was our way to be outside, you know, and but yet still be safe," Derek Badsky said.

Thanks to his mom’s art skills… Hendrix has gone on countless of adventures over the last year, sharing them on social media.

"And so our driveway was our escape outside of the house," Derek Badsky said. "And so it was really good for him and gave him a little bit of a sense of normalcy."

Neighbors love it, too.

"It puts a big smile on all of our faces," Farah Lange said.

"I'm glad to see them doing things with Hendrix because I think that is crucial for kids," Don Carney said.

No artistic skills required — anyone can do it. And across the U.S. people are in a #chalkyourwalk movement.

"It's been a great bonding experience for us as a family to kind of share this time together," said Derek Badsky. "And we're very thankful to have these memories."