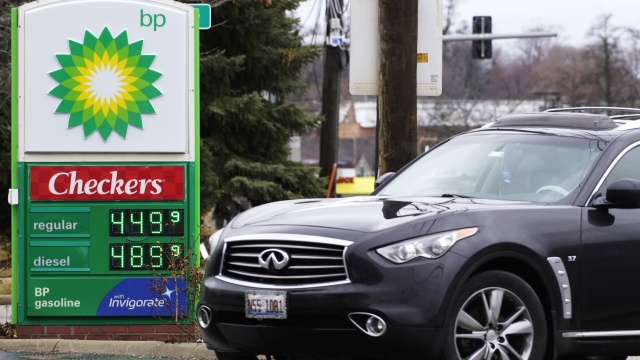 Just as Americans gear up for summer road trips, the price of oil remains stubbornly high, pushing prices at the gas pump to painful heights.

Drivers were paying $4.37 for a gallon of regular Tuesday, on average, according to AAA. That's 25 cents higher than a month ago, and $1.40 more than a year ago.

"The price of gas is ridiculous," said Joel Baxter, a nurse, who was filling up his car at a BP station in Brooklyn, New York, so that he could commute 26 miles to work. "The money, your salary, is practically the same, and everything is going up, so they should do something about it."

The high price of oil is the main cause of the biting gasoline prices. A barrel of U.S. benchmark crude was selling for around $100 a barrel Tuesday, a price tag that has been climbing throughout the year. The high price of oil is largely because many buyers are refusing to purchase Russian oil because of its invasion of Ukraine. The European Union is considering an embargo on oil from Russia, which is a major supplier. Those pressures leave less oil to go around.

Drivers such as Baxter say they wish the government could step in to help, although few can say what solution that would bring lasting relief.

"There are very few things that a president can do to help lower the cost of oil, and this administration tried to do pretty much everything that it can," said Andrew Gross, spokesman for AAA.

President Joe Biden released oil from the Strategic Petroleum Reserve in November and March, hoping to reduce prices. That helped temporarily, but prices shot back up and stayed stubbornly high.

President Biden in remarks Tuesday stressed that fighting inflation is his top priority, a sign of both the economic challenges caused by prices rising at the fastest pace in four decades and the political drag for Democrats that has resulted.

He said that switching away from fossil fuels and greater energy efficiency will ultimately protect Americans from higher gasoline and heating and cooling costs.

The president noted that Americans are finding ways to limit how many fill-ups they need because of higher prices. "They're doing everything in their power to figure out how to not show up at the gas pump," he said.

White House press secretary Jen Psaki said a suspension of the federal gas tax is "an option on the table." The suspension could in theory reduce gas prices by as much as 18 cents a gallon.

Republican lawmakers say the key is to lease more federal land for oil and gas drilling and send a positive message to energy producers by greenlighting the Keystone XL pipeline that President Biden nixed last year.

As the war Russia is waging on Ukraine continues and demand for gasoline continues to grow, experts are not expecting relief at the pump any time soon.

"We will see this trend continue probably throughout summer, mainly because of demand," Gross said. "The weather's getting warmer. The days are getting nicer. People are hitting the road."

That's particularly hard on people who drive for a living, or those who must drive to get to work.

"It's expensive," said Peter Lector, 28, who spent $60 Tuesday to fill up his tank in Brooklyn. "I'm doing Uber, so it's costing me a lot of money every morning."

If the price of gasoline keeps going up, he feels like he might have to find another job, he said.

Still others have accepted that high gasoline prices may be here to stay.

"It is what it is," said David Stephen, who was also buying gasoline in Brooklyn. "Everything goes up, never comes down .... You can't do anything about it."