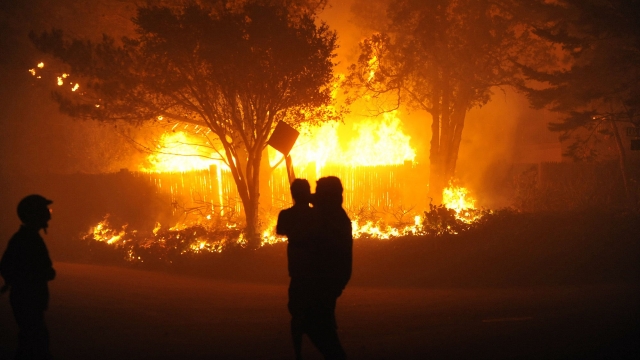 The Bootleg wildfire continues to ravage a national forest in southeastern Oregon. The fire's frontline looks like a Hellscape.

The blaze is growing by about four miles a day. It is already half the size of the state of Rhode Island.

A high-pressure system sitting over the region caused officials to call for red flag warnings once again.  The winds are slowing, but they are expected to pick up again over the weekend.

Oregon Governor Kate Brown says the state has had no downtime to recover from last year's record fires.

She said: "It's shaping up to be another difficult wildfire season. And unfortunately, we're responding to new fires as we're still recovering from last year's devastating fire season."

Two thousand firefighters and emergency crew members are working around the clock to put out hot spots and cut fire ditches.

The Bootleg fire is the state's fourth largest fire since 1900. Four weeks of heat waves and an unprecedented drought have made conditions worse.

The smoke from the Bootleg fire is spreading across the country.  A satellite loop shows the smoke drifting into Minnesota and creating hazards there.

Along the California and Nevada border, homeowner Tony Galvez and his daughter had to flee their home as the out-of-control Tamarack Fire burned dangerously close.

Galvez said: "My daughter and I, we grabbed as much as we could and got out. Didn't have much time, but we got out alive so that's what matters."

Galvez's family was safe, but the fire destroyed his house.

Officials ordered more evacuations as the fire, heatwave and drought in the area continue to rage on.