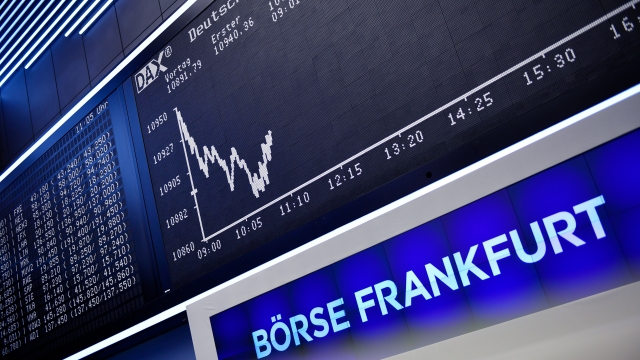 The past 10 years in Germany were known as "the golden decade" for the country's mostly sustained economic growth. But that may be over. The German economy shrank in the second quarter of 2019. And while the country's drop in domestic production was just 0.1%, that signaled recession fears amid global uncertainty.

Economists say that's a result of tremors shaking an interconnected world economy. The Wall Street Journal reports that analysts in Germany say the country's export sector is facing disruptions as a result of the trade war between the U.S. and China. Another big factor is fear over Brexit and the U.K.'s potentially accelerated exit from the European Union.

While stocks in the U.S. were falling Wednesday amid concerns of a downturn, economic indicators were less than promising in many locations. Economic output in the U.K. is retrenching for the first time since 2012. China's economy is growing at its slowest rate in nearly 30 years. Investment is dropping in Mexico. Unemployment is up and industrial production down in Brazil.

Last month, the International Monetary Fund dropped its forecast for global economic growth to 3.2%. That's the lowest prediction of economic expansion since 2009. In the U.S., economists view a recent drop in yields in the 10-year Treasury Note as an indicator of economic retrenchment.

Germany's economic minister, Peter Altmaier, called the country's second-quarter economic report "a wake-up call and a warning." In a statement, he said: "We are in a weak growth phase but not yet in a recession, which we can avoid if we take necessary measures. Politicians and businesses must now act together.”

As a result of recession fears, the European Central Bank said it's considering an economic stimulus package in September that could include interest rate cuts and hundreds of billions of dollars in bond purchases.

Analysts say Europe could also benefit if Chinese businesses decide to purchase more goods from the EU as a result of the trade war with the U.S. Then again, they say, friction between the world's two leading economies will continue to fuel uncertainty.