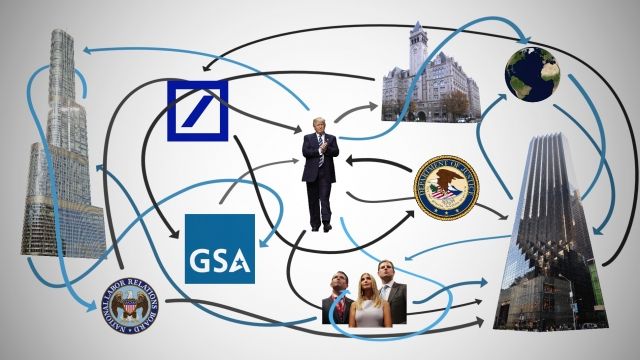 SMS
Donald Trump's Conflicts Of Interest Are Unprecedented
By Zach Toombs
By Zach Toombs
January 10, 2017
The new president and his family are positioned to profit from policy they help create.
SHOW TRANSCRIPT

Previous presidents have either sold off their business or turned it over to an independent trustee. Trump has done neither.

Instead, he will still profit from his business, and his children will run it — children who are helping create government policy.

Let's look at a few ways this will create a huge problem. For one, the Trump family still runs the company, so they'll do business in foreign countries, while also shaping foreign policy with those countries, which will affect how much money their business makes — and how much money goes back to them.

Trump's company owes millions of dollars to Germany's Deutsche Bank, which is negotiating a settlement with the Justice Department, which will be controlled by Trump.

And finally, the Trump Hotel in Washington, D.C., leases its building from a federal agency, which will be overseen by Trump, effectively letting him appoint his own landlord.

In all these ways, Trump's presidency will position him and his family to reap big profits from government policy they create.