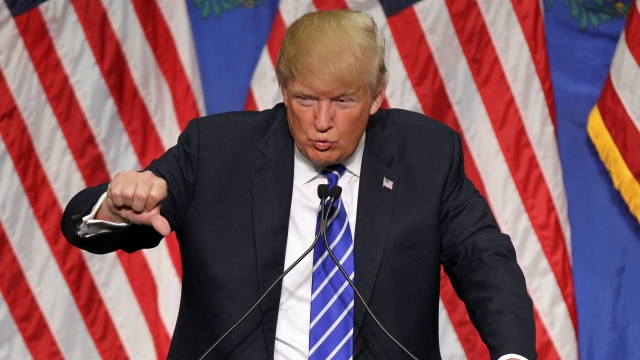 Trump is doing way worse with Catholic voters than Mitt Romney did in 2012.

Donald Trump is losing with Catholic voters — by a lot.

Here's the breakdown in the Catholic vote between President Obama and Mitt Romney. In 2012, Catholics went for Obama over Romney by about 2 percentage points. It was 50 percent to 48 percent.

And here's that breakdown now between Hillary Clinton and Trump. According to a recent poll from Public Religion Research Institute, Trump is 23 points behind Clinton among Catholics. That breakdown is 55 percent to 32 percent.

So what happened? It might've been Trump's public feud with the head of the Catholic Church.

If you'll remember, back in February, Trump and Pope Francis went back and forth, with both lobbing criticisms at each other.

"A person who thinks only about building walls, wherever they may be, and not building bridges is not Christian," said Pope Francis.

"For a religious leader to question a person's faith is disgraceful," Trump said.

In the same statement, Trump accused the pope of being influenced by the Mexican government. He also said: "If and when the Vatican is attacked by ISIS, which as everyone knows is ISIS’s ultimate trophy, I can promise you that the Pope would have only wished and prayed that Donald Trump would have been President because this would not have happened. ISIS would have been eradicated unlike what is happening now with our all talk, no action politicians."

Or it could be Clinton's choice for a running mate. Tim Kaine, a Jesuit-educated Catholic and former missionary.

Either way, Catholics have made the biggest swing from 2012 in favor of Clinton out of any demographic group, and that'll be a problem for Trump in November.