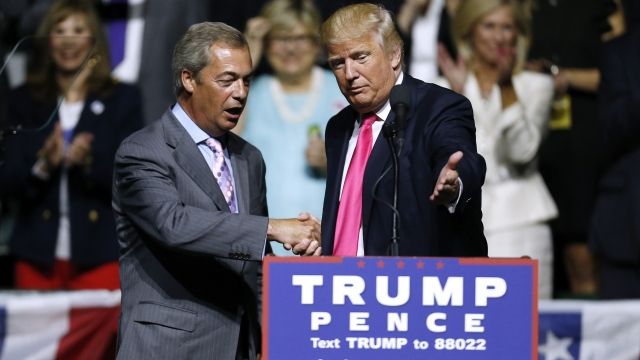 SMS
There's A Flaw In Donald Trump's Brexit Analogy
By Matt Picht
By Matt Picht
October 24, 2016
Donald Trump says he expects to defy the polls with a "Brexit situation." But the pollsters actually got Brexit right.
SHOW TRANSCRIPT

Donald Trump now admits he's behind in the polls, but he's not giving up hope yet.

Trump — who's down by about five points nationally — is referring to the U.K.'s vote to break away from the EU. That vote shocked the world and threw European politics into turmoil.

Trump's been a big Brexit fan, and he often claims he's going to cause a similar electoral upset.

"We will win; we will shock the world. This is going to be Brexit-plus," he told a rally.

Problem is, the polls didn't actually get Brexit wrong. The two sides were polling neck and neck in the days before the referendum, which is about how the actual results turned out.

If Trump's looking for an actual example of voters defying the pollsters, he'd be better off with the U.K.'s chaotic 2015 general election.

Polling for that race forecast a dead heat between the two major candidates, sparking all sorts of speculation about how third parties could influence the result. But on election day, David Cameron and the Conservatives won handily — a short-lived victory, thanks to the Brexit vote.

Polling results in that race overlooked a number of "shy" Conservative voters who were reluctant to admit their support when asked. The Trump campaign has been pushing a version of that argument when asked about its polling deficit.