Don't Expect The Bushes To Jump On The Trump Train 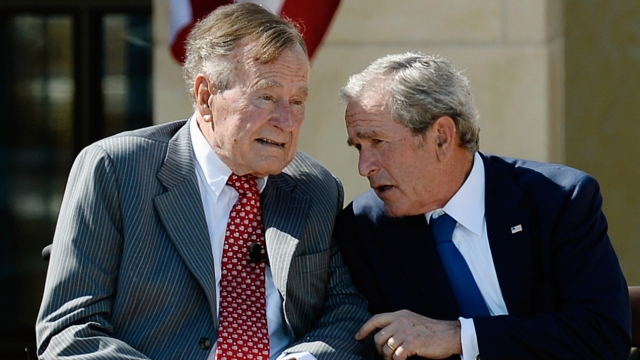 It's not really a surprise. Donald Trump has bashed Jeb Bush and President George W. Bush a lot during the primary.

It looks like all of Donald Trump's Bush-bashing during the GOP primary has come back to haunt him. According to The Texas Tribune, both Presidents George H.W. and George W. Bush aren't planning to endorse the presumptive presidential nominee.

Bush 43's aide released a statement, saying he doesn't plan to participate at all during the rest of the election season. His father's spokesman said Bush 41 was retired from politics, adding, "He came out of retirement to do a few things for Jeb, but those were the exceptions that proved the rule."

The announcements definitely aren't a surprise after Trump not only bashed Jeb throughout the campaign but also took serious jabs at Bush 43, calling the president a liar over and over this year.

"So you think he should be impeached?" CBS anchor John Dickerson asked Trump during a debate.

But it definitely deviates from what the Bush family has done in the past. Bush 41 has endorsed a GOP candidate for office since he lost his re-election in 1992; Bush 43 did the same for John McCain in 2008 and Mitt Romney in 2012.

The family might be able to keep from endorsing Trump this go-around, but it's pretty clear how they feel about the GOP's 2016 pick.

"In my experience, the strongest person usually isn't the loudest one in the room," Bush 43 said at a campaign stop in South Carolina.

This video includes images from Getty Images and clips from CBS, Fox News and PBS.