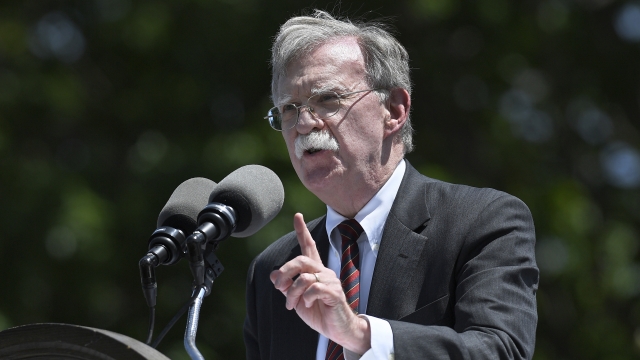 The Department of Justice is now seeking an emergency order to block the publication of former national security adviser John Bolton's upcoming book. "The Room Where It Happened: A White House Memoir" is expected to be released Tuesday.

According to The New York Times — which received an advance copy of the manuscript — part of Bolton's book focuses on the House's impeachment inquiry into President Trump.

Bolton reportedly writes the House's probe was too narrowly focused on the president's dealings with Ukraine and instead should have looked into other times President Trump tried to further his political interests.

Bolton writes that one of those times reportedly occurred when President Trump stated willingness to interfere in criminal investigations into big companies in China and Turkey as "personal favors to dictators he liked."

In an excerpt published by The Wall Street Journal, Bolton writes, "Had Democratic impeachment advocates not been so obsessed with their Ukraine blitzkrieg in 2019, had they taken the time to inquire more systematically about Trump’s behavior across his entire foreign policy, the impeachment outcome might well have been different."

The DOJ's emergency order move comes after the Trump administration already filed a lawsuit against Bolton. The lawsuit argues Bolton's manuscript is filled with classified information, and that he didn't finish a contractually obligated review process with the White House.

President Trump criticized Bolton on Twitter Wednesday night, calling him a "disgruntled boring fool" whose book is "made up of lies and fake stories."

Rep. Adam Schiff, who served as the lead impeachment manager, condemned Bolton for not testifying during the House's impeachment hearings, saying Bolton "may be an author, but he’s no patriot." While Bolton refused to testify before House lawmakers, he did later say he'd testify in the Senate trial if subpoenaed. He never was.