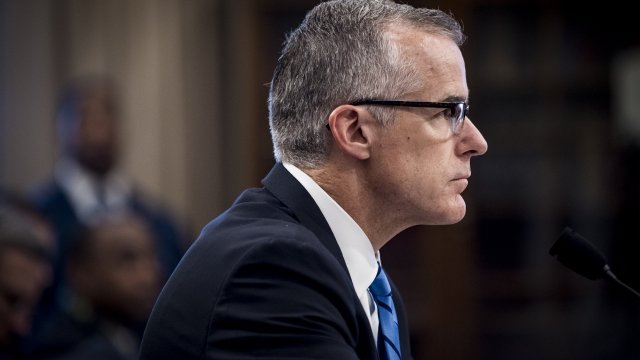 SMS
DOJ Report: Andrew McCabe Lacked Candor Several Times, Even Under Oath
By Jake Jones
By Jake Jones
April 13, 2018
The then-unreleased report was part of why he was fired hours before he was set to retire.
SHOW TRANSCRIPT

A Justice Department report accuses former FBI Deputy Director Andrew McCabe of lacking candor, breaking government policy and misconduct. The then-unreleased report was part of why he was fired hours before he was set to retire.

The DOJ's inspector general found that on multiple occasions, McCabe denied greenlighting the disclosure of information to The Wall Street Journal, revealing an investigation into the Clinton Foundation.

President Donald Trump was quick to seize on the news, tweeting McCabe "LIED! LIED! LIED!" and that McCabe "was totally controlled by Comey."

But the report actually takes Comey's side, saying McCabe misled his former boss.

The report also concludes McCabe's steps to inform the media about the Clinton Foundation investigation violated DOJ and FBI policies, which qualifies as misconduct.

McCabe has claimed his firing is an attempt to discredit him before his potential testimony to special counsel Robert Mueller.