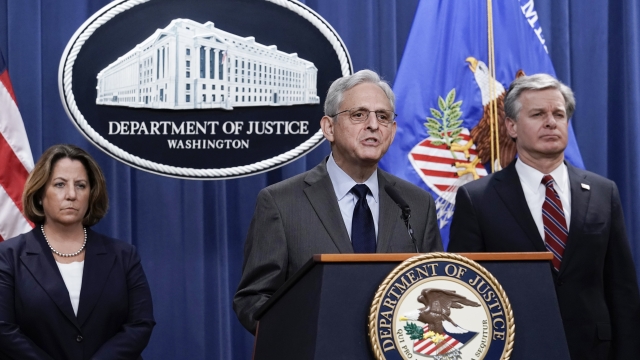 Two of the suspects arrested are accused of trying to obstruct the U.S. criminal investigation of Chinese tech giant Huawei.

In a rare joint news conference, the FBI and the Justice Department announced charges in several cases of alleged Chinese spying.

They're charged with trying to recruit a U.S. law enforcement agent as their spy, but the recruit was a double agent.

Arrest warrants have been issued but it's unclear whether the pair will ever be taken into custody.

Huawei was indicted in 2019 for allegedly misleading HSBC and other banks about its business in Iran.

The deal was reached as President Joe Biden and Chinese counterpart Xi Jinping have sought to minimize signs of public tension.

In the other cases, Chinese nationals are accused of targeting individuals in the U.S. to act on China's behalf, and of trying to force a Chinese national to return to China.

Officials say the cases are part of a broader pattern of illegal influence efforts by China.

"Each of these cases lays bare the Chinese government's flagrant violation of international laws as they work to project their authoritarian view around the world, including within our own borders," Monaco said.

There was no immediate comment from Huawei or the Chinese government, but in the past Huawei has called the federal investigation "political persecution, plain and simple."