Does Mexico Qualify As A 'Safe' Country For Asylum-Seekers? 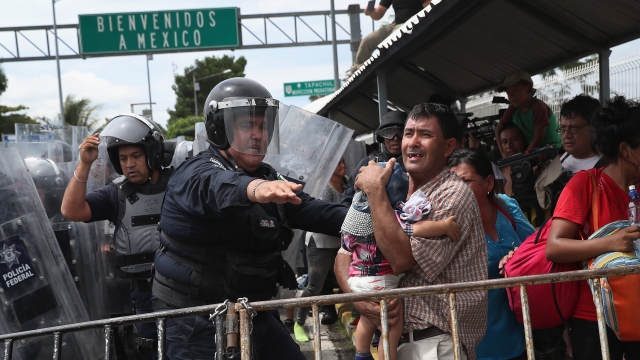 SMS
Does Mexico Qualify As A 'Safe' Country For Asylum-Seekers?
By Ben Schamisso
By Ben Schamisso
June 6, 2019
The U.S. wants Mexico to process all asylum-seekers crossing its southern border. But some advocates say Mexico doesn't meet the definition of "safe."
SHOW TRANSCRIPT

Mexico said on Wednesday that it still opposes the idea of signing a "safe third country" deal with the U.S. Under such an agreement, Central American migrants journeying through Mexico en route to the U.S. would be forced to apply for asylum in Mexico instead.

Mexico has long refused to enter such a treaty because it doesn't believe it has the resources to process all asylum-seekers fleeing the so-called Northern Triangle.

Yet American negotiators have been urging their Mexican counterparts to sign that deal as a way to ease President Trump's threats to impose tariffs on Mexican goods.

Now, even if a deal was on the table, immigrant advocates say Mexico is far from being a safe enough country for asylum-seekers.

"The U.S. State Department actually has multiple travel warnings for various states in Mexico due to the high rates of violence and organized crime. … And then, when migrants do experience situational violence, Mexico, you know, unfortunately, does have widespread impunity for crimes that are committed across the board."

"Obviously Mexico is not the safest country in the world. But that's not the standard."

Ira Mehlman, a spokesperson for a group that lobbies for immigration restriction, argues that Mexico would qualify legally as a "safe third country".

That's because, he says, a "safe third country" is merely a state where an asylum-seeker's life would not be threatened because of race, religion, political opinions or other social factors.

"The standard is, are you out of reach of the people who were — you're claiming — politically persecuting you?"

But even under that narrow standard, human rights advocates say Mexico would still not qualify.

"We have seen cases where the persecutor has tracked the asylum-seeker, followed them into Mexico. ... And we have also talked to other individuals who have said that the very same gang that they're fleeing is in the same shelters, sometimes detention centers, that they're in."

"I don't think Mexico is up to par to provide the protections that we would expect."

Sarah Pierce of the nonpartisan Migration Policy Institute says, like Mehlman, that not all asylum-seekers would be at risk of persecution in Mexico under the legal definition of asylum.

But she also stresses that the law requires safe third countries to guarantee asylum-seekers access to a full and fair asylum procedure and basic protections. And Mexico isn't yet capable of doing that, she says.

"They can't provide asylees status as quickly as they should. And then that has implications for whether or not they're providing basic social services, including work authorization."

Mexican immigration authorities are already understaffed and overwhelmed by the rising number of asylum applications in that country. New asylum cases there in 2019 are on track to be twice as high as in 2018, which was already the highest on record.

So the possibility of taking on around 100,000 additional cases every year could "further collapse" the Mexican system, analysts say. But with time and serious help from the U.S. and international organizations, things could get better.

"I think aspiring to make Mexico a safe third country is something that the U.S. should be working towards, but Mexico needs more robust help. They need technical assistance."