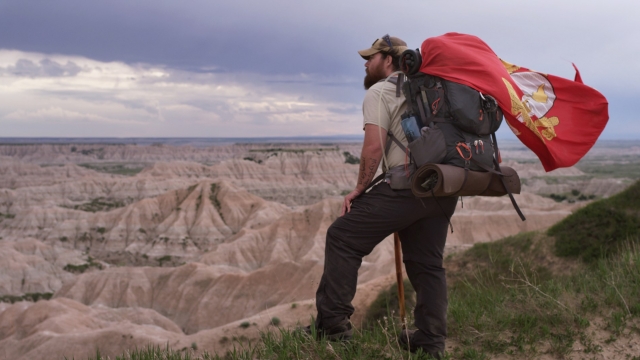 SMS
Walking 6,000 Miles To Heal The Pain of War
By Nathaniel Reed
By Nathaniel Reed
May 31, 2021
Jon Hancock, a Marine Corps veteran, is the subject of the new documentary “Bastards Road,” just released on-demand by Gravitas Ventures.
SHOW TRANSCRIPT

"I was 308 pounds. I was absolutely massive. I had let myself go. I had eaten my feelings, I drank my feelings," he reflected in a Newsy interview.

Rushed to a VA Hospital in Maryland after downing a handful of pills, Hancock nearly became a statistic: according to the latest numbers from the Department of Veterans Affairs, nearly 18 veterans commit suicide each day.

The VA helped reverse Hancock's overdose, but couldn’t provide the help he so desperately needed.

"It's obvious that the government has one track: ‘This is what PTSD looks like, this is how you treat it.’ And that's not correct," he said.

A chance encounter with another combat veteran inspired him to take a walk — a very long walk.

"My tagline is: walk long distances, figure some s--- out. And that's exactly what I did," he continued. "I want to show other veterans that they're capable of, not only physically, but emotionally."

The walk attracted media attention, and the eyes of high school classmate and filmmaker, Brian Morrison.

"I was just compelled by what he was doing," Morrison told Newsy. "The first time we talked, Jon had already walked 1,700 miles."

Morrison followed Hancock across the U.S., meeting families who lost loved ones to war, and veterans who served alongside him in Iraq.

"As I started on the walk, I was realizing every day that these memories kept flooding back to me," Hancock said. "I was forcing myself into my own version of cognitive behavioral therapy, if you will.

"When you meet with your brothers, and you meet with these Gold Star families, it's just compounded, and the healing that took place between us was amazing."