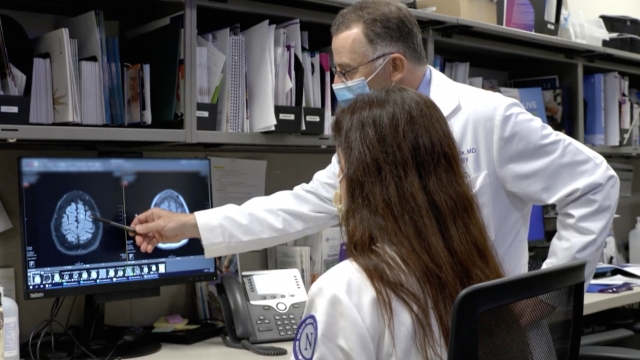 SMS
Doctors Are Still Hunting For The Cause Of Long COVID Brain Fog
By Lindsey Theis
By Lindsey Theis
September 19, 2022
Studies show 30% of COVID patients report brain fog a few months after they're sick. It's 65 to 85% for long-haulers sick beyond that.

COVID-related brain fog is a condition that can feel very defeating and overwhelming.

Newsy's Lindsey Theis has COVID-related brain fog herself. And it's a topic she's covered since 2020. She says each person she's spoken with tells her it's a dramatic change that impacts how they think and move throughout their lives. For this story, Theis met a family dealing with what she says is one of the worst cases she's ever seen.

"I feel like a brain blizzard half the time," she said.

Lentino is immunocompromised. She's had COVID twice. Since June 2021, it's left her with several neurological setbacks. She says her brain fog is among the worst of it.

"I couldn't remember passwords to get into certain systems. I worked at the library and I would forget what I was doing while I was doing it," Lentino said.

Her conversations now go at a snail's pace as she searches for words.

The mother of four and grandmother of two had to quit work and file for disability.

She can't watch her grandkids. She won’t run errands or drive. Now, her time is spent mothering her brain.

Dr. Igor Koralnik is chief of neuro-infectious diseases and co-director of the Northwestern Medicine Comprehensive COVID-19 Center, where he also runs a lab.

He says 70% of his COVID brain fog patients are like Lentino — women in their early 40s.

"We see that attention is their main cognitive problem," he said. "Problem with attention, problem with memory, problem with multitasking and briefly, problems getting through their daily life and working in their current job capacity. ...  We have people who have been infected back in March 2020 and still have decreased quality of life because of those symptoms and decreased cognitive function."

Scientists think COVID cognitive dysfunction is from brain inflammation — but what causes it is still itself foggy.

One leading theory is that long COVID is an autoimmune disorder, where the immune system attacks healthy cells in the body, including the brain.

Studies show 30% of COVID patients report brain fog a few months after they're sick. It's 65 to 85% for long-haulers sick beyond that. 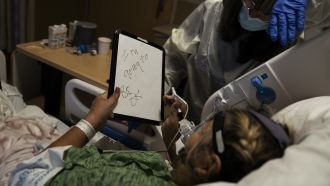 How Long COVID Is Affecting Millions Of Americans' Wallets

But even diagnosing brain fog is tricky. It's invisible. There's no set case definition but it can include trouble focusing, struggling to remember names, places, or words, reacting slowly, confused judgment, losing a train of thought often and fatigue or exhaustion from concentrating.

Back in Rensselaer, Lentino's husband helps her prepare her pills. She takes eight medications and two vitamins daily, plus a handful more as needed. That's in addition to her therapies and memory aids like calendars and post it notes. Those cues share spots in the Lentino home near the signs of her former creative and vibrant self. Prescription bottles near her paintings. Reminders near her Star Wars string art.

"It's frustrating and depressing. It takes so long to do anything," she said.

In the spot where she used to stand to paint, brushes and acrylics wait patiently.

Lentino is waiting too, like so many brain fog sufferers. It's a long, draining wait and the ultimate test of patience.

On a hopeful note, research shows many brain fog patients recover memory and attention near the 6-to-9-month mark. For treatment, some doctors prescribe medicine, like steroids or antihistamines, plus therapies like speech or cognitive rehabilitation therapy. If you have brain fog yourself, experts say you can try memory games and puzzles, and focus on quality sleep and healthy eating.